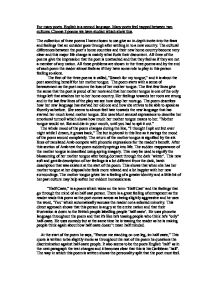 For many poets, English is a second language. Many poets feel trapped between two cultures. Choose 3 poems we have studied which show this.

For many poets, English is a second language. Many poets feel trapped between two cultures. Choose 3 poems we have studied which show this. The collection of three poems I have chosen to use give an in-depth incite into the fears and feelings that an outsider goes through after settling in to a new country. The cultural differences between the poet's home countries and their new home country become very clear and this major life change is mainly what fuels their discontent. All three of the poems give the impression that the poet is unattached and that they feel as if they are not a member of any nation. All these problems are shown in the three poems and by the end of each poem the reader almost feels as if they have some role to play in this person feeling so alone. The first of the three poems is called, "Search for my tongue," and it is about the poet searching herself for her mother tongue. The poem starts with a sense of bereavement as the poet mourns the loss of her mother tongue. The first few lines give the sense that the poet is proud of her roots and that her mother tongue is one of the only things left that attaches her to her home country. ...read more.

There is a great feeling of entrapment as the reader reads this poem as the poet comes across as being slightly aggressive and he uses the word, 'You' which automatically accuses the reader not a selected minority. This direct approach shows that this person is angry at the entire nation and that their frustration is down to the British people labelling people 'half caste'. He uses phonetic language throughout the poem and that it's like he's teasing people who think he's "only" half-caste. He uses comedy but at the same time he is teasing the reader as he is making people think again about how half caste doesn't mean half minded. At the start of the poem he says, "Excuse me standing on one leg, im half caste," This quote is written to be slightly ironic as throughout the rest of the poem he questions the discrimination against half-caste people. It also seems to be the poets English 'half' as in the next paragraph the text changes and it becomes clear that this is his Caribbean 'half'. The way in which this poem is written shows the personality split that the poet must feel. Sometimes he may feel proud to be English and another day he may be ashamed to be Caribbean and vice versa. ...read more.

The quote, "Didn't impress the school friend who sat on my bed, asked to see my weekend clothes," shows that to the English friend her Pakistani clothes were boring and she asked to see her casual wear instead of admiring the dazzling colour. In Pakistan these clothes would be rated very highly amongst teenagers and this huge difference in opinions give her a option, to be a English girl or a Pakistani girl. This indecision shows how she is stuck between two cultures. The poem says that she "longs" for denim and corduroy indicating her English side, but she also wants her parent's Pakistani camel skin lamp. When the lamp is switched on, it shows a wonderful array of colours, but when it's off it becomes dull. Maybe this represents the colourfulness of the Pakistani culture in comparison with the colourless English culture. In conclusion these three poems give the reader a different view of people who are half-caste or who have emigrated to a different country. They show the torment of not being fully attached to a certain culture and also the strain of adapting to a new language and a new culture. The poets of these three poems help the reader consider issues that they would have never thought about before for example the offence of being called 'Half-Caste'. ...read more.