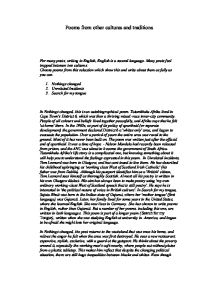 For many poets, writing in English, English is a second language. Many poets feel trapped between two cultures. Choose poems from this selection which show this and write about them as fully as you can - Nothings changed

Poems from other cultures and traditions For many poets, writing in English, English is a second language. Many poets feel trapped between two cultures. Choose poems from this selection which show this and write about them as fully as you can. 1. Nothings changed 2. Unrelated Incidents 3. Search for my tongue In Nothings changed, this is an autobiographical poem. Tatamkhulu Afrika lived in Cape Town's District 6, which was then a thriving mixed-race inner-city community. People of all colours and beliefs lived together peacefully, and Afrika says that he felt 'at home' there. In the 1960s, as part of its policy of apartheid (or separate development) the government declared District 6 a 'whites only' area, and began to evacuate the population. Over a period of years the entire area was razed to the ground. Most of it has never been built on. The poem was written just after the official end of apartheid. It was a time of hope - Nelson Mandela had recently been released from prison, and the ANC was about to become the government of South Africa. Tatamkhulu Afrika's life story is a complicated one, but knowing something about it will help you to understand the feelings expressed in this poem. In Unrelated incidents, Tom Leonard was born in Glasgow, and has continued to live there. ...read more.

He or she explains why the BBC thinks it is important to read the news in a BBC accent: no one will take the news seriously if it's read with a voice lik / wanna yoo / scruff. He or she speaks here in the accent of an ordinary speaker/viewer - just the kind of voice which the newsreader is rejecting. A newsreader would never really reveal his or her prejudices directly to the viewer in this way. So what the newsreader 'says' in this poem perhaps needs to be seen as the unspoken message of the way the news is presented. In Search for my tongue, the poet explains what it is like to speak and think in two languages. She wonders whether she might lose the language she began with. However, the mother tongue remains with her in her dreams. By the end, she is confident that it will always be part of who she is In Nothings changed, on the page, the poem is set out in six stanzas (or verse paragraphs), each of eight fairly short lines. This kind of regularity in the lay-out creates a sense of control: the poet is very clear about what he is feeling - no sudden flying into a rage. ...read more.

This also makes it more likely that we will see things from his 'point of view'. The images in the poem are of the wasteland itself, the expensive restaurant, and the working man's caf�. In search for my tongue, the tongue can be a part of the body - the part you speak with. It has also come to mean the language that you speak. The phrase lost my tongue (line 2) is used colloquially to mean that someone is tongue-tied and does not know what to say. The tone in Nothings changed can be read out in a number of ways, we can read it out angrily as if to show the author's anger that nothing has really changed in South Africa. We can also read it out in a sad and calm way to show the author's real feelings towards this whole situation of nothing being changed. In unrelated incidents, he believes that the media see the viewers in Glasgow, or indeed the viewers in most other parts of Britain, as scruffs. In search for my tongue, the poem should be read out, mournfully, because she feels that she has lost her mother tongue? Angrily, because she feels forced to use her foreign tongue when she does not really want to? Triumphantly to show that she regains her beautiful mother tongue at night in her dreams? ...read more.