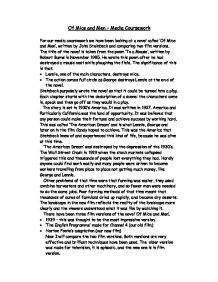 For our media coursework we have been looking at a novel called 'Of Mice and Men', written by John Steinbeck and comparing two film versions.

Of Mice and Men - Media Coursework For our media coursework we have been looking at a novel called 'Of Mice and Men', written by John Steinbeck and comparing two film versions. The title of the novel is taken from the poem 'To a Mouse', written by Robert Burns in November 1985. He wrote this poem after he had destroyed a mouse nest while ploughing the field. The significance of this is that: * Lennie, one of the main characters, destroys mice. * The action comes full circle as George destroys Lennie at the end of the novel. Steinbeck purposely wrote the novel so that it could be turned into a play. Each chapter starts with the description of a scene; the characters come in, speak and then go off as they would in a play. The story is set in 1930's America. It was written in 1937. America and Particularly California was the land of opportunity. It was believed that any person could make their fortune and achieve success by working hard. This was called 'The American Dream' and is what Lennie, George and later on in the film Candy hoped to achieve. This was the America that Steinbeck knew of and experienced this kind of life, because he was alive at this time. 'The American Dream' was destroyed by the depression of the 1930's. The Wall Street Crash in 1929 when the stock markets collapsed triggered this and thousands of people lost everything they had. ...read more.

This makes the audience feel sorry for Lennie in a way because he acts like a big baby. He interrupts and talks about his things and doesn't listen to what Curley's wife is saying. Also, it gives a slight chill because one minute Lennie is being nice to Curley's wife and the next, he kills her. Curley's wife becomes very flirtatious and asks Lennie to stroke her hair. This all leads to the murder. He enjoys this and she looks like she enjoys it. She is more excited in the newer version, there is heavy breathing and she shows that she likes it a lot. Lennie stares at her a lot and there are lots of close-ups of this. In the older version when Lennie kills her, you see the close-up of his hand over her mouth. The camera switches from a low angle shot of her feet to a close up of her face where we see the fear in her eyes and then the camera goes back to her feet where one of her shoes fall off. This is very effective because we see just enough of her eyes to see how scared she is. Then there is the very sad and final indignity where she loses her shoe in death and she has been so proud of her appearance. Then the episode ends to create suspense. The newer version is much closer to the novel. ...read more.

The directors probably choose not to add this part because it is not as effective as the endings they went with. I think that the new film is better than the 1981 version because it doesn't follow the novel as much in the beginning and the end, so it is more interesting and dramatic to watch. Gary Sinise makes his film more interesting by adding scenes at the beginning and the end and I think this is very effective. When the white writing comes down over the black screen at the start, along with the music, you think, "I'm going to enjoy this film." You are hooked already because it has an effective beginning. The music is dramatic and the first few scenes keep you in suspense. It is a great version because it doesn't follow the novel that much so it isn't boring and you aren't waiting for the film to end. The main actors, Gary Sinise and John Malkovich are well known so this was also a good factor of why the film was the better of the two. They are really good actors and they made it so realistic. I would definitely recommend the newer version to anyone who enjoys dramatic but sad stories. If you can't follow the novel this is a good version to watch because it gives the outline of the story better and you can grasp it slightly more than with the older version. This is the better out of the two versions because it is actually a film and not in episodes. You can get into it more without it stopping and starting with new scenes. ...read more.