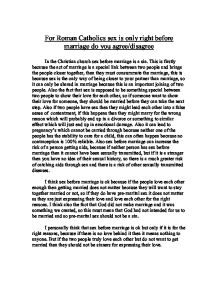 For Roman Catholics sex is only right after marriage. Do you agree?

For Roman Catholics sex is only right before marriage do you agree/disagree In the Christian church sex before marriage is a sin. This is firstly because the act of marriage is a special link between two people and brings the people closer together, then they must consummate the marriage, this is because sex is the only way of being closer to your partner than marriage, so it can only be shared in marriage because this is an important joining of two people. ...read more.

Also it can lead to pregnancy's which cannot be carried through because neither one of the people has the stability to care for a child, this can often happen because no contraception is 100% reliable. Also sex before marriage can increase the risk of a person getting aids, because if neither person has sex before marriage then it cannot have been sexually transmitted, but if it is a stranger then you have no idea of their sexual history, so there is a much greater risk of catching aids through sex and there is a risk of other sexually transmitted diseases. ...read more.

I think also the fact that God did not make marriage and it was something we created, so this must mean that God had not intended for us to be married and so pre-marital sex should not be a sin. I personally think that sex before marriage is ok but only if it is for the right reasons, because if there is no love behind it then it means nothing to anyone. But if the two people truly love each other but do not want to get married then they should not be sinners for expressing their love. ...read more.