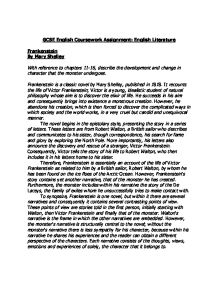 Frankenstein by Mary Shelley - With reference to chapters 11-16, describe the development and change in character that the monster undergoes.

GCSE English Coursework Assignment: English Literature Frankenstein By Mary Shelley With reference to chapters 11-16, describe the development and change in character that the monster undergoes. Frankenstein is a classic novel by Mary Shelley, published in 1818. It recounts the life of Victor Frankenstein; Victor is a young, idealistic student of natural philosophy whose aim is to discover the elixir of life. He succeeds in his aim and consequently brings into existence a monstrous creation. However, he abandons his creation, which is then forced to discover the complicated ways in which society and the world works, in a very cruel but candid and unequivocal manner. The novel begins in the epistolary style, presenting the story in a series of letters. These letters are from Robert Walton, a British sailor who describes and communicates to his sister, though correspondence, his search for fame and glory by exploring the North Pole. More importantly, his letters also announce the discovery and rescue of a stranger, Victor Frankenstein. Consequently, Victor tells the story of his life to Robert Walton, who then includes it in his letters home to his sister. Therefore, Frankenstein is essentially an account of the life of Victor Frankenstein as related to him by a British sailor, Robert Walton, by whom he has been found on the ice floes of the Arctic Ocean. However, Frankenstein's story contains yet another narrative, that of the monster he has created. Furthermore, the monster includes within his narrative the story of the De Laceys, the family of exiles whom he unsuccessfully tries to make contact with. To synopsize, Frankenstein is one novel, but within it there are several narratives and consequently it contains several contrasting points of view. These points of view are stories told in the first person, initially starting with Walton, then Victor Frankenstein and finally that of the monster. Walton's narrative is the frame in which the other narratives are embedded. ...read more.

As the De Lacey family work to provide for themselves off the land, the monster is able to watch them use tools to get food and to chop fire wood. This inspires the monster to help the family in their labours and secretly collect fire wood for them at night, with the use of their tools. In doing this the monster derives great pleasure from helping the family and making them happy. It is the first time since he was created that he has been able to please human beings, even if it is in secret. "During the night I often took his tools, the use of which I quickly discovered and brought home firing sufficient for the consumption of several days. I remember, the first time I did this, the young woman, when she opened the door in the morning, appeared greatly astonished on seeing a great pile of wood on the outside. She uttered some words in a loud voice, and the youth joined her, who also expressed surprise. I observed, with pleasure, hat he did not go to the forest that day, but spent it in repairing the cottage and cultivating the garden." The next discovery the monster makes is one of great significance and importance to the development of his character and is central to how he behaves and interacts with people from this point onwards. He begins to discover what language is and starts to understand that is a means of communicating with others and a way of sharing emotions and experiences, in short, life. "I found that these people possessed a method of communicating their experience and feelings to one another by articulate sounds." In the following months the monster learns the rudiments of the English language and starts to pronounce certain, commonly used words himself, such as, "fire, milk, bread and wood." However, he also learns to pronounce some words, but cannot yet grasp an understanding of their meaning, such as, "Good, dearest and unhappy." ...read more.

Noting the subtitle of the novel, 'The Modern Prometheus' gives a further clue as to what Mary Shelley is suggesting about the new science of her age. There are two versions of the Prometheus myths; In the ancient Greek version, Prometheus challenges the power of the gods in order to help mankind. He is punished by Zeus for stealing the fire of the gods and consequently is chained forever to a rock, his liver perpetually eaten out by a vulture. In the Roman version of the myth, Prometheus is a creator who moulds the first human out of clay. The two myths gradually converged and the fire of the gods became the vital force with which Prometheus brought his clay images to life. This leaves us with certain apparent parallels to Victor Frankenstein; Like Prometheus, Frankenstein is chained forever to a torturous destiny, to pursue the monster through the wilds of the earth. In addition to this Prometheus suffers physical torture, whereas Frankenstein is tormented by continual psychological torment. The novel could be read as a parable highlighting the dangers of pushing the boundaries of scientific research. It may well be that Mary Shelley wanted her work to be a warning to all scientists. She was fascinated by the discoveries and scientific inventions that modern science produced. However, at the same time she was very aware of the potential dangers of scientific quest. In Victor Frankenstein's case, his obsessive thirst for knowledge and power developed into a self destructive passion. Through his research, he severs himself off from his family and friends, who are all finally destroyed by his creation. The innermost embedded narrative of the monster reveals to us that he is in an equally miserable and isolated situation. The monster is tragically fated to a life of rejection and isolation from humanity and ultimately we tend to sympathise with him and condemn Victor Frankenstein for his actions that resulted in this. ...read more.