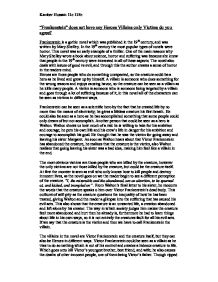 &quot;Frankenstein&quot; does not have any Heroes Villains only Victims do you agree?

"Frankenstein" does not have any Heroes Villains only Victims do you agree? Frankenstein is a gothic novel which was published in the 19th century, and was written by Mary Shelley. In the 19th century the most popular types of novels were horror. This novel was an early example of a thriller. One of the main reasons why Mary Shelley wrote a book about science, horror and suffering was because she knew that people in the 19th century were interested in all of these aspects. The novel also deals with issues of good vs evil, and through this the author creates a sense of horror in the readers mind. Heroes are those people who do something unexpected, so the creature could be a hero as he lived and grew up by himself. A villain is someone who does something for the wrong reasons and enjoys causing havoc, so the creature can be seen as a villain as he kills many people. A victim is someone who is someone being targeted by a villain and goes through a lot of suffering because of it, in this novel all of the characters can be seen as victims in different ways. ...read more.

People will say that it wasn't the creature's fault that he committed all these evil acts, because he didn't ask to be created. Then abandoned by his creator, this will make people sympathise with the creature, making us the reader judge him as a victim not a villain. In conclusion I would say that the creature is all those mentioned in the title, that is why the creature is so interesting. Frankenstein could be seen as a scientific hero for creating life and could be seen as a villain for abandoning his creation. All in all I would say that this gothic novel Frankenstein is about ambition, people's interest in science, isolation, insecurity, putting characters in extreme situations and also how much of a risk people are willing to take for the ambition and courage, which were shown in different ways through out the novel. In my opinion overall I think that the creature can be seen as all those mentioned in the title, Frankenstein can be seen as only a hero or a villain and Walton can be seen as only a hero or a victim. Word count: 1075 ?? ?? ?? ?? Kamber Hussain 11c 11Fc ...read more.