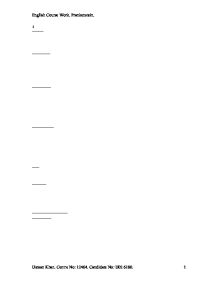 Frankenstein - how does the monster change during the novel?

Frankenstein In the novel 'Frankenstein' Mary Shelley Portrays a Monster. The view of the monster is hideous. In the beginning he was childlike, kind and helpful but with the time he gains knowledge he becomes miserable. Mary Shelley writes about the monster to express her views about knowledge and the changes it can bring. In the 19th century with the industrial revolution there were negative effects. At the time there was a lot of development in Science and technology causing people unsettled. The people died because diseases spread. When people felt unsettled they wanted to know why are these changes happening so, they turned towards religion or the supernatural. That's why stories about supernatural became popular. 'Frankenstein' is one of the typical examples of that time which portrays the effects of these changes. As we read more we get to know that Victor Frankenstein described the monster when he first came alive. ...read more.

When he was cold, when he felt lonely and when he was hungry there was no one to guide him. Devote the monster hideous physical appearance but he was kind, helpful and childlike. But the time he knew that who he was created by his inner monster came alive and he wanted to get revenge. He also found, with pleasure, that the fire gave 'light as well as heat'. He also learned to cook things from the offal left by the travellers been roast which tasted better than the berries he gathered from the trees. He put the berries in the offal but soon he found that they spoiled in the live embers but nuts were improved. Here we see that the monster is experiencing his senses and learning new things. Later on we found that when he was new to the cottagers he behaved very well. ...read more.

When he reached Switzerland he saved a girls life and was very pleased with himself. But unfortunately the girl's friend injured him because he thought that the monster is hearting her. The monster remained in Switzerland with his pain and agony for a couple of days. Then he reached Geneva after all. We feel that the knowledge has turned the monster into an Evil. Mary Shelley wants us to know that knowledge can be dangerous and can lead to the lowest dejection; if somebody knows a lot about everything he can become unsatisfied. In my conclusion I would say that the monster changes as he gains knowledge. In the beginning he was kind and helpful, but became dangerous and horrible as he gained knowledge. Mary Shelley describes about the monster to create an image of those circumstance in our head. She also tells us that knowledge can be dangerous. We feel that the monster was innocent and Victor Frankenstein is responsible for everything that has happened. English Course Work. Frankenstein. Usman Khan. Centre No: 12464. Candidate No: U02 6180. 1 ...read more.