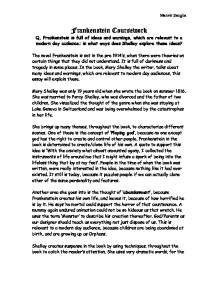 Frankenstein is full of ideas and warnings, which are relevant to a modern day audience; in what ways does Shelley explore

Frankenstein Coursework Q. Frankenstein is full of ideas and warnings, which are relevant to a modern day audience; in what ways does Shelley explore these ideas? The novel Frankenstein is set in the pre 1914's, when there were theories on certain things that they did not understand. It is full of darkness and tragedy in some places. In the book, Mary Shelley the writer, talks about many ideas and warnings, which are relevant to modern day audiences, this essay will explain these. Mary Shelley was only 19 years old when she wrote the book on summer 1816. She was married to Percy Shelley, who was divorced and the father of two children. She visualized the thought of the genre when she was staying at Lake Geneva in Switzerland and was being overwhelmed by the catastrophes in her life. She brings up many themes, throughout the book, to characterize different scenes. One of these is the concept of 'Playing god', because no one except god has the right to create and control other people. Frankenstein in the book is determined to create/clone life of his own. A quote to support this idea is 'With the anxiety what almost amounted agony, I collected the instruments of life around me that I might infuse a spark of being into the lifeless thing that lay at my feet'. ...read more.

He shows us that he was interested in the study of creation when he says 'More, far more, will I achieve: treading in the steps already marked, I will pioneer a new way, explore unknown powers and unfold to the world the deepest mysteries of creation'. He wanted to justify to himself if it was possible, because there were many Theories going around. One of the theories around had actually said that you could retrieve an older brain and use it in the head of another. People were amazed by the thought of this, because it could be used to bring back the dead. Frankenstein later in the narrative discovered the implications of Playing God, because Nature should run naturally not by the hands of experimentation. It killed his brother, wife and friend of the family. Frankenstein should have thought over his institution before deciding to create the monster, because he didn't know how it was going to react, for all he knew it could've been a monster wanting to kill everyone around it. This brings back the point of 'Consequences', because Frankenstein didn't think before he acted, and the result is what happened to his family. ...read more.

As a result this ended up the monster killing Victor's brother, wife and friend. If Frankenstein had listened to what the monster had told him to do, everything would have been all right. I think the monster felt lonely and wanted someone to live with, because of what he looked like. Everyone was prejudice over what he looked like, so he knew that if Frankenstein had created another person of the opposite sex, everything would be all right. Frankenstein in the book appeared as a very brainy person, as he created his own life. He didn't get on very well with his creation, so he should have thought over first about messing with life, because he didn't know what kind of trouble it could cause. Frankenstein was abandoned; this made him feel as if he was the only person with out no one. His creator, Frankenstein should have looked after him more. The novel Frankenstein is a very gothic story that deals with the concept of many themes around us. At the time of when it was written people were astonished by if people could actually clone others of the same personality and features. There were many theories on it, which didn't make sense until Frankenstein discovered it. ...read more.