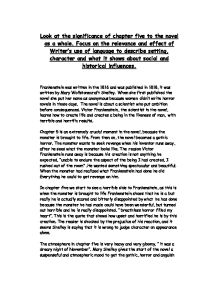 Frankenstein. Look at the significance of chapter five to the novel as a whole. Focus on the relevance and effect of Mary Shelley's use of language to describe setting, character and what it shows about social and historical influences.

Look at the significance of chapter five to the novel as a whole. Focus on the relevance and effect of Writer's use of language to describe setting, character and what it shows about social and historical influences. Frankenstein was written in the 1816 and was published in 1818, it was written by Mary Wollstonecraft Shelley. When she first published the novel she put her name as anonymous because women didn't write horror novels in those days. The novel is about a scientist who put ambition before consequences. Victor Frankenstein, the scientist in the novel, learns how to create life and creates a being in the likeness of man, with terrible and horrific results. Chapter 5 is an extremely crucial moment in the novel, because the monster is brought to life. From then on, the novel becomes a gothic horror. The monster wants to seek revenge when his inventor runs away, after he sees what the monster looks like. ...read more.

But when he brought the monster to life we saw a nasty side to him. He turned into a selfish, self absorbed, obsessed man "I had deprived myself of rest and health". His actions of abandoning the monster made him feel scared and regretful. From then on the reader can see that the behavior of Frankenstein leads to many tragic deaths through-out the rest of the novel. Even though we know who is doing the killing, the people in the novel have no idea that it is the monster doing it as Frankenstein fails to reveal what he has done. The themes in the novel show how Dr Frankenstein's obsession took over him. And it shows how he ''Deprived'' himself for his creation. He shut himself down from his family and ignored the consequences and has ended up becoming obsessed by his work. Shelley's moral of the novel appears to be not play with nature, because if it goes wrong you have to deal with the consequences and the responsibility. ...read more.

So there is a split opinion in the novel and Shelley wants the reader to use their own conscience to decide which side they are going to pick. All of my views of this novel are that Frankenstein is selfish man and does not take any responsibility for what he has done. He has no intensions of solving the problem he has caused; he just chooses to let it go which results with terrible consequences. I feel sorry for the monster because he only wants to be loved and protected. I think Mary Shelly sees her self in this novel as when she was younger her mother died when she was just 8 days old. And her father implied that it was her fault for her mother's death. He also remarried and her new step-mother never took to her. Which I think is the same as what Frankenstein did to the monster, as when he seen what he looked like he disowned him. This might be another reason why Mary Shelley wrote this novel. ?? ?? ?? ?? ...read more.