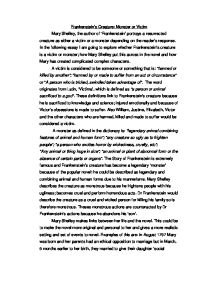 Frankenstein's Creature: Monster or Victim Mary Shelley, the author of 'Frankenstein' portrays a resurrected creature as either a victim or a monster depending on the reader's response. In the following essay I am going to explore whether Frankenstein's creature is a victim or monster; how Mary Shelley put this across in the novel and how Mary has created complicated complex characters. A victim is considered to be someone or something that is: "harmed or killed by another"; "harmed by or made to suffer from an act or circumstance" or "A person who is tricked, swindled taken advantage of". The word originates from Latin, 'Victima', which is defined as "a person or animal sacrificed to a god". These definitions link to Frankenstein's creature because he is sacrificed to knowledge and science; injured emotionally and because of Victor's obsessions is made to suffer. Also William, Justine, Elizabeth, Victor and the other characters who are harmed, killed and made to suffer would be considered a victim. A monster as defined in the dictionary is: "legendary animal combining features of animal and human form"; "any creature so ugly as to frighten people"; "a person who excites horror by wickedness, cruelty, etc"; "Any animal or thing huge in size"; "an animal or plant of abnormal form or the absence of certain parts or organs". The Story of Frankenstein is extremely famous and Frankenstein's creature has become a legendary 'monster' because of the popular novel: he could be described as legendary and combining animal and human forms due to his mannerisms. ...read more.

Walton's admiration to Victor makes the reader also admire him so therefore is more likely to believe the positive recollection of Victor's story because two opinions support it. Lost, Victor confides in his saviour as he tells Walton the story of how obsession led to death and this also is a warning to Walton's obsession for fame and glory. Frankenstein begins with his childhood where Mary Shelley describes this as perfect we know this when she writes; 'My mother's tender caresses and my father's smile of benevolent pleasure while regarding me are my first recollections'. This shows Shelley has made a contrast with Victor's childhood and later on in his life. This also emphasises his parent's love, his perfect life and his fond memories of his childhood. This also provides dissimilarity with that of the creature. Frankenstein's creature never has a perfect life, fatherly love and fond memories. At the beginning the reader does not sympathise with Victor's privileged background until his mother dies of Scarlet fever: Shelley included this effect to get Victor thinking about life and death and gives an emotionally felt reason to unearth and discover the secret of immorality. In Chapter 4, Frankenstein becomes fixated about discovering the 'principle of life', 'No one can conceive the variety of feelings which bore me onwards, like a hurricane in the first enthusiasm of successes'. Shelley describes his determination 'like a hurricane' which implies and hints that the hurricane and the obsession will 'spin out of control' destroying everything. ...read more.

Frankenstein meets with his creation where he tells him about his life after he left on the 'dreary night'. As he meets and sees his creation, Dr Frankenstein describes him as 'combined with disdain and malignity' and 'too horrible for human eyes' this provides the evil image of the creature that has been continued throughout until the creature speaks. The contradicting imagery that Mary Shelley creates when the creation speaks is that of a pleasant image; 'All men hate the wretched; how, then, must I be hated, who am miserable beyond all living things! Yet you, my creator, detest and spurn me, thy creature, to whom thou art bound by ties only dissoluble by the annihilation of one of us.' This makes the reader sympathise with the creature because he says that he's unhappy and hated. It also contradict the image of the creature that the reader has because it give humane qualities to him and show he has emotions and not just a pure hot-blooded murderer. As Frankenstein's creature tells his story: the readers first impression is almost child like and discovering the world; 'A strange multiplicity of sensations seized me, and I saw, felt, heard, and smelt, at the same time; and it was, indeed, a long time before I learned to distinguish between the operations of my various senses.' This makes the reader sympathise with him. Overall Frankenstein's creature is portrayed as someone murdering and acting monstrous because of how he was treated, victimized. My personal opinion this gives an emotionally complicated character and although his actions shouldn't be dismissed the overall impression of this is don't tamper with the forces of god. ...read more.