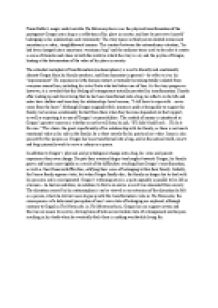 ﻿Franz Kafka?s magic realist novella The Metamorphosis uses the physical transformation of the protagonist Gregor into a bug as a reflection of his place in society, and how he perceives himself belonging in his relationships and community. The story opens in third person limited omniscient narration in a sober, straightforward manner. This contrast between the extraordinary situation, ?he had been changed into a monstrous verminous bug? and the ordinary terms used to describe it creates a sense of disorder and chaos in both the world in which the story is set, and the psyche of Gregor, hinting at the deterioration of the value of his place in society. The extended metaphor of transformation (metamorphosis) ...read more.

come from the heart.? Although Gregor originally feels immense pride at being able to support his family, he becomes emotionally distant from them when they become dependent on that support, as well as expecting it as one of Gregor?s responsibilities. The symbol of money is introduced as Gregor?s greatest concern is whether or not he will keep his job, ?If I didn?t hold back?I?ll do it for sure.? This shows the great superficiality of his relationship with his family, as there is not much emotional value in his role in the family; he is there merely for his practical use value. Irony is also present for this purpose as Gregor has been transformed into a bug, and in the natural world, insects and bugs primarily work to serve a colony or a queen. ...read more.

Gregor?s withering away is a quite arguably a parallel to his life as a human ? he had no ambition, no relations to thrive on and as a result was alienated from society. The alienation caused by his metamorphosis can be viewed as an extension of the alienation he felt as a person, which he did not seem to grasp until this transformation. Like in The Namesake, the consequences of a delusional perception of one?s own state of belonging are explored, although contrary to Gogol in The Namesake, in The Metamorphosis, Gregor has no support system and thus has no means to recover, driving himself into an irrevocable state of estrangement and despair, resulting in his death when he eventually feels there is nothing worthwhile living for. ...read more.