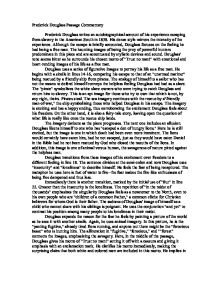 Frederick Douglass Passage Commentary Frederick Douglass writes an autobiographical account of his experience escaping from slavery in the American South in 1838. His dense style mirrors the intensity of the experience. Although the escape is briefly accounted, Douglass focuses on the feeling he had being a free man. The haunting images of being the prey of powerful hunters predominate in this piece and are accentuated by stylistic devices and sound. Douglass' tone seems bitter as he surrounds his chosen motto of "Trust no man!" with emotional and heart-rending images of his life as a free man. Douglass uses a series of figurative images to portray his life as a free man. He begins with a simile in lines 14-16, comparing his escape to that of an "unarmed mariner" being rescued by a friendly ship from pirates. The analogy of himself to a sailor who has not the means to defend himself conveys the helpless feeling Douglass had had as a slave. The "pirate" symbolizes the white slave owners who were trying to catch Douglass and return him to slavery. ...read more.

The repetition of "in the midst of thousands" emphasizes the singularity Douglass feels as a newcomer to the North, even to his own people who are "children of a common Father," a common cliche for Christian believers for whom God is their father. The sadness of Douglass' image of himself as a child who cannot share with his siblings is poignant. He uses the conjunction "and yet" to contrast his position among many people to his loneliness in their midst. Douglass expands the reason for the fear he feels by painting a picture of the world as he sees it with another simile. Again, he uses animal imagery. In this picture, he is the "panting fugitive," already tired from running, and anyone out there might be the "ferocious beast" who is hunting him. The alliteration in "fugitive," "ferocious," and ""forest" connects the images, emphasizing the savagery. Here, in the middle of the passage, Douglass gives his motto of "Trust no man!" setting it off with a caesura and giving it emphasis with an exclamation mark. ...read more.

Here he listed the conditions of his situation: no home, friends, money, credit, shelter, benefactor, bread, all the while pursued by "merciless men-hunters," the alliteration connecting the image. He contrasts his hunger to the plenty around him, his homelessness to the many homes around him, then makes analogous his fellow-men to wild beasts. Once again, Douglass returns to the animal/hunter imagery. This time he creates another metaphor for the beast metaphor to enhance their rapacious nature. These "beasts" are compared to "monsters of the deep" who "swallow up the helpless fish." This returns the imagery to the initial sea-imagery at the beginning of the paragraph, only this time with no hint of excitement. Now he is helpless with seemingly no imminent rescue. This powerful ending to the piece circles the imagery so that the reader is left with the picture of one who, though he escaped a terrible situation, only went from the frying pan into the fire. This state of freedom is terrifying and no resolution to the fears is apparent. Douglass went from slavery to being the prey of all men. ...read more.