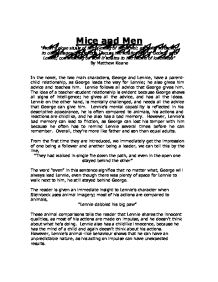 From a close study of the opening of the novel; and with reference to other stages throughout, discuss the relationship of George and Lennie, commenting on how it relates to the theme of loneliness

Mice and Men "From a close study of the opening of the novel; and with reference to other stages throughout, discuss the relationship of George and Lennie, commenting on how it relates to the theme of loneliness" By Matthew Keane In the novel, the two main characters, George and Lennie, have a parent-child relationship, as George leads the way for Lennie; he also gives him advice and teaches him. Lennie follows all advice that George gives him. The idea of a teacher-student relationship is evident because George shows all signs of intelligence; he gives all the advice, and has all the ideas. Lennie on the other hand, is mentally challenged, and needs all the advice that George can give him. Lennie's mental capability is reflected in his descriptive appearance, he is often compared to animals, his actions and reactions are childlike, and he also has a bad memory. However, Lennie's bad memory can lead to friction, as George can lost his temper with him because he often has to remind Lennie several times before he can remember. Overall, they're more like father and son than equal adults. From the first time they are introduced, we immediately get the impression of one being a follower and another being a leader, we can tell this by the line, "They had walked in single file down the path, and even in the open one stayed behind the other" The word ...read more.

alone, I could live so easy" This proves that George can see Lennie as a hindrance to his life, that without Lennie, George wouldn't have to always look after him. George also bring up the subject of what happened in Weed, just to make Lennie feel bad, "Jus wanted to feel that girls dress...well, how the hell did she know you just wanted to feel her dress?" Also he makes Lennie feel bad by saying that it's Lennie's fault that they both lose their jobs, "I got you! You can't keep a job and you lose me ever' job I get" This long passage acts as a warning to what happens later in the barn with Curley's wife, we also learn of what happened in Weed, "How the hell did she know you jus' wanted to feel her dress? She jerks back and you hold on like it was a mouse. She yells and we got to hide in an irrigation ditch all days with guys looking for us" This shows us Lennie's urge to touch soft things, such as a dress, or Curley's wife hair. The incident with Curley's wife has an uncanny resemblance to what happened in Weed, as while stroking Curley's wife's hair, she gets scared and tries to scream, Lennie tries to stop her screaming and holds on to her, but he unfortunately breaks her neck. ...read more.

When Candy finds Curley's wife's body, George makes it clear that he will not let anyone hurt Lennie "Maybe they'll lock 'im up an' be nice to 'im" This shows the strength of their relationship, as George knows that Lennie has done something bad, and should be punished, but he still doesn't want anyone to harm him. Unfortunately, George was unable to save Lennie from himself, and so when Lennie accidentally kills Curley's wife, George has no other option, but to shoot Lennie, he has to take this option because if Lennie was put into prison, he would be alone, with no-one to look after him properly, and condemned to a life if terror and madness. Curley, on the other hand, wants Lennie to die in pain and suffering. "Shoot for his guts. That'll double 'im over" Slim, being the voice of authority in the novel, gives the final confirmation on the killing of Lennie, "I guess we gotta get 'im" In my opinion, the novel was very good, the shock ending was very surprising and unexpected, but a closer look throughout the novel foreshows us what happens, such signs as what happened in Weed, the mice that Lennie kills, the need to pet soft things, all of this gives the reader clues to what happens at the end. In my opinion, the relationship between George and Lennie is less than a relationship between two equal adults, and more like father-son, as one of the pair continually leads the other, while the other always follows ...read more.