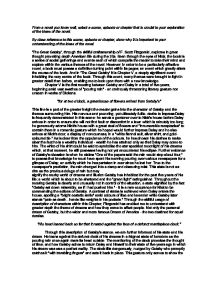 From a novel you know well, select a scene, episode or chapter that is crucial to your exploration of the ideas of the novel.

From a novel you know well, select a scene, episode or chapter that is crucial to your exploration of the ideas of the novel. By close reference to this scene, episode or chapter, show why it is important to your understanding of the ideas of the novel. 'The Great Gatsby', through the skillful craftsmanship of F. Scott Fitzgerald, explores in great thought provoking depth American life during the 20s. Seen through the eyes of Nick, the book is a series of social gatherings and events each of which compells the reader to take their mind and explore within the various themes of the novel. However, in order to be a particularly effective novel, a book must posess a definitive turning point within its pages; an event which greatly alters the course of the book. And in 'The Great Gatsby' it is Chapter V, a deeply significant event inhabiting the very centre of the book. Through this event, many themes were brought to light in greater detail than before, enabling me to look upon them with a new knowledge. Chapter V is the first meeting between Gatsby and Daisy in a total of five years, beginning amid vast swathes of "pouring rain" - an ominously threatening literary gesture not unseen in works of Dickens. ...read more.

"His head leaned back so far that it rested against the face of a defunct mantlepiece clock." Through this description of Gatsby's stance, we are further informed of his state and his dream. He leans against the defunct clock of his dreams in a feigned state of boredom as the pouring rain once again rears its head outside. The mentioning of the clock provokes the thought of time, and how Gatsby aches to return Daisy and himself to their state of five years ago in which his dream was was a perfect reality. The clock tilts dangerously, nudged by Gatsby who promptly catches it "with trembling fingers" and sets it back in place. This gesture only serves to show the fact that even though Gatsby caught the clock and prevented it from smashing and being destroyed outright, time itself cannot be restored - the clock is still defunct, silent and of no use to anyone but a filler for space. Gatsby nervously apologises, the simple response being "It's an old clock." One line saying clearly and simply the fact that Gatsby's dream is old, outdated and simply unrealistic. ...read more.

Through this line, the fact that Daisy was no longer a dream but a reality is brought to bear. Within Gatsby's dream, she was perfect, but with reality comes realism and the true nature of things - states serving only to disappoint. The beauty of fiction and dreams and the harshness of reality are further distinguished when Daisy wishes to push Gatsby around in a pink cloud which she looks upon from behind the window. Such a fantastical gesture could surely not be carried out, just as the reality of Daisy and Gatsby cannot. The Chapter ends with Nick leaving Gatsby's house, descending the marble steps and "into the rain" as he leaves the couple together. Through the description of characters, setting and events within this Chapter I was taken upon a detailed exploration of the ideas which the novel contains. The futility of Gatsby's dream became all to clear along with echoes of criticism of the American Dream. The strength of emotion, the pain of time and the illusion and hope that man can create were all highlighted to me in a thought provoking Chapter of a multi-layered book which holds much depth in its wealth of pages. ...read more.