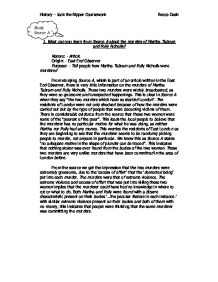 From studying Source A, whish is part of an article written in the East End Observer, there is very little information on the murders of Martha Tabram and Polly Nicholls. These two murders were widely broadcasted

1. What can you learn from Source A about the murders of Martha Tabram and Polly Nicholls? Nature: - Article Origin: - East End Observer Purpose: - Tell people how Martha Tabram and Polly Nicholls were murdered From studying Source A, whish is part of an article written in the East End Observer, there is very little information on the murders of Martha Tabram and Polly Nicholls. These two murders were widely broadcasted, as they were so gruesome and unexpected happenings. This is clear in Source A when they say "the two murders which have so startled London". The residents of London were not only shocked because of how the murders were carried out but by the type of people that were becoming victims of them. There is considerable evidence from the source that these two women were some of the "poorest of the poor". This leads the local people to believe that the murderer has no particular motive for what he was doing, as neither Martha nor Polly had any money. This worries the residents of East London as they are beginning to see that the murderer seems to be randomly picking people to murder, not anyone in particular. We know this as Source A states "no adequate motive in the shape of plunder can be traced". This indicates that nothing stolen was ever found from the bodies of the two women. These two murders are very unlike murders that have been committed in the area of London before. From the source we get the impression that the two murders were extremely gruesome, due to the 'excess of effort' that the 'demented being' put into each murder. The murders were that of extreme violence. The extreme violence and excess of effort that was put into killing these two women implies that the murderer could have had no knowledge in where to cut or what to do. ...read more.

Therefore Source E is useful to explain why Jack avoided capture as there was no concrete evidence on the appearance of the person that was committing these murders. Which meant that Jack didn't have to worry about being caught, as there were no suspicions that it was he. In conclusion, Sources D and E are very useful in enlightening us on why Jack the Ripper escaped the police, and got away with the murders of so many women. These sources show that the surrounding areas of where the murders were committed ensured that Jack had a quick and easy get away path before anyone saw him after each murder. The ignorance of the police in both Sources D and E helped in the continuing freedom of Jack as they weren't prepared to do anything to find him, however long it took or how much it cost. The vagueness of the only eyewitness also helped Jack pursue his freedom. However, Source E is not completely reliable to explain why Jack escaped being captured, as we are not positive on what point of view the newspaper is being written from. 4. Use Sources F and G, and your own knowledge, to explain how the police tried to catch Jack the Ripper. Source F: Nature: - Police leaflet Origin: - Metropolitan Police Purpose: - Plea for information on any suspects of the murders Source G: Nature: - Letter Origin: - Home Secretary Purpose: - Asking is a reward can be granted if someone found the murderer (being exempt from the rule that had been put in place not to give rewards any longer). During the time of the murders the only way the police could prove someone committed a murder was to catch them in the act or to get the suspect to confess. So to try and catch the murderer and get evidence they had to do many things. ...read more.

This hindered the investigation massively, and could have been avoided if the local people had just been patient and cooperative with the police. Therefore, the local people contributed to the freedom of Jack, as there weren't cooperative with the police, who were doing the best they could. Another factor, relating back to the police, was the fact that there were two separate police forces trying to solve the big question, Who is Jack the Ripper? This caused many problems during the investigation, especially on the evening of the double murder, as the police forces would not mix to share ideas or evidence. On the night of the double murder, one was committed in London and the other in Greater London. This caused huge problems, as the police were not allowed to cross-territory, which meant that the case was now split between two police forces who weren't willing to help each other. However, if they had have helped each other the may have ended up closer to discovering who the murderer actually was. In conclusion, the police do have to take a huge amount of blame for the continuing freedom of Jack the Ripper, but they cannot take all of the blame. For example local residents did not help the police in any way, shape or form to find the killer; in fact they made their job harder. The reality that there was only one eyewitness, who gave an extremely unclear account, again, made the job for the police even harder! If just one person had seen the killer very briefly, but with certainty of what they saw, the police may have been able to use this to lead them towards the murderer. Therefore, the police are mainly to blame for the progressing independency of Jack the Ripper, but many other factors contributed to them not being successful, where as if these problems weren't present the police may have been successful with the measures they took to try and improve their investigation and find Jack the Ripper. ?? ?? ?? ?? History - Jack the Ripper Coursework Becca Dash ...read more.