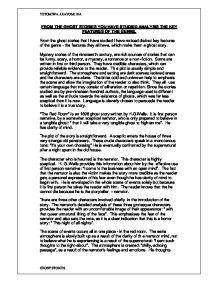 From the ghost stories that I have studied I have noticed distinct key features of the genre - the features they all have, which make them a ghost story.

FROM THE GHOST STORIES YOU HAVE STUDIED ANALYSIS THE KEY FEATURES OF THE GENRE. From the ghost stories that I have studied I have noticed distinct key features of the genre - the features they all have, which make them a ghost story. Mystery stories of the nineteenth century, are rich sources of stories that can be funny, scary, a horror, a mystery, a romance or a non-fiction. Some are written in first or third person. They have credible characters, which can provide reliable evidence to the reader. The plot is usually simple and straightforward. The atmosphere and setting are dark scenes; isolated areas and the characters are alone. The bitter cold and unknown help to emphasis the scene and allow the imagination of the reader to also think. They all use certain language that may consist of alliteration or repetition. Since the stories studied are by pre-nineteen hundred authors, the language used is different as well as the attitude towards the existence of ghosts, which was far less sceptical than it is now. Language is cleverly chosen to persuade the reader to believe it is a true story. "The Red Room" is an 1896 ghost story written by H.G.Wells. It is first person narrative, by a somewhat sceptical narrator, who is only prepared to believe in a tangible ghost: " that it will take a very tangible ghost to frighten me". ...read more.

The sympathetic background is conveyed by the use of adjectives in contrast to the cosy fire. The sense of being under threat is emphasised by the denouncing echoing: "the echoing of the stir" and the inert silence: "too stimulating for the imagination." References to shadows maintain the sympathetic background and arouse the suspicion that there is some unnatural lurking in the dark: "undefinable quality of presence" The decline in the complacent attitude of the narrator which is emphasised when he begins to speak to himself: "I spoke aloud", but his voice echoed and light started to flicker. His narrative creates this eerie atmosphere which clouds his mind with fear. This is repeated further on the story when he speaks to himself again. He tries to sound firm but the reader senses his hysteria: "scratching away at a match" Imagery is cleverly used in the story because it conveys his emotions in extreme isolation as a comparison: "and left an ocean of mystery and suggestion beyond its island of light". " A shadow came sweeping up after me, and one fled before me into the darkness". He describes the light patch in the middle of his room in contrast to a reference of ships on the sea. ...read more.

There is a sympathetic background - nature is in sympathy with what is going on: "the night was pretty dark". The setting is described by the repetition of "dark"; this is a particular feature of a ghost genre. The forest is very eerie and he does not know where he is. Which in turn increases the sense of panic and tension: "nothing of the lay of the land". Ambrose Bierce is not as highly descriptive as Wells, in the Red Room. In this story, emphasis is mainly placed on Browers emotions and experience: "suffocated by the activity of his own heart", this alliteration aids in emphasis his fear. The uses of similes are also rather affective in the text: "stood like trees" as it helps the reader to imagine the experiences endeavoured by the murderer. The use of adjective: "Heavy iron door " also creates powerful imagery as it suggests a slow journey back to jail. Compulsion is a common feature of a ghost genre: he looked behind him". They are usually short sharp reactions but do create tension and excitement. Therefore from what I have read I found the Red Room to be far more interesting as it contained many, if not all common features of a ghost genre but it also created fear in my mind and the atmosphere enabled me to sympathise with the character. YETOMIWA ARAYOMI 10A GHOST STORIES ...read more.