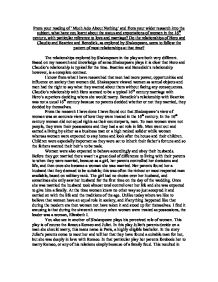 From your reading of 'Much Ado About Nothing' and from your wider research into the subject, what have you learnt about the status and expectations of women in the 16th century, with particular reference to love and marriage?

From your reading of 'Much Ado About Nothing' and from your wider research into the subject, what have you learnt about the status and expectations of women in the 16th century, with particular reference to love and marriage? Do the relationships of Hero and Claudio and Beatrice and Benedick, as explored by Shakespeare, seem to follow the pattern of most relationships at that time? The relationships explored by Shakespeare in the play are both very different. Based on my research and knowledge of some Shakespeare plays it is clear that Hero and Claudio's relationship is typical for the time. Beatrice and Benedick's relationship however, is a complete contrast. I know from what I have researched that men had more power, opportunities and influence on society than women did. Shakespeare viewed women as sexual objects and men had the right to say what they wanted about them without facing any consequences. Claudio's relationship with Hero seemed to be a typical 16th century marriage with Hero's superiors deciding whom she would marry. Benedick's relationship with Beatrice was not a usual 16th century because no parents decided whether or not they married, they decided by themselves. ...read more.

Also there is this quote, "Daughter remember what I told you. If the price do solicit you in that kind, you know your answer" this tell us that the daughter would marry who her father tells her to, supporting the fact that the daughter had no say what so ever in who she married. Men at the time of the 16th century expected their brides to be pure and virginal so when Claudio believes to see that Hero is no longer "pure" and "virginal" he decides to denounce her, but he say's that he will do it in public to humiliate Hero. This conversation between Claudio and Don Pedro supports it, Claudio-"if I see anything tonight why I should not marry her tomorrow, in the congregation where I should wed, there will I shame her." Don Pedro-"And as I wooed for thee to obtain her, I will join thee to disgrace". This shows us that men thought that they could treat women how they want whether in public or not. This showed the dominance they thought they had over women. This also showed us that Claudio didn't know Hero that well because relationships at that time weren't long with sometimes the couple only meeting for the first time on the day of the wedding. ...read more.

In the end you get the impression that Benedick and Beatrice's marriage will be much better and fairer one than the marriage of Claudio and Hero. I say this because the marriage of Claudio and Hero is a typical 16th century relationship because the man is in control of all decisions. It's a different matter with the relationship with Benedick and Beatrice; to me their relationship is more like a relationship you would find in the 21st century. I say this because both the man and the women make the decisions and the women does not take a back seat to the man in fact if anything she very much in the front seat. All in all I feel that Shakespeare was a chauvinist. I say this because all through out the play, 'Much Ado About Nothing', Shakespeare gives men a leading role in all the relationships par one. So he did have the view that men were better than women. Although he did try and give women a role, with the character of Beatrice so he did try and give them a chance. You do have to remember that Shakespeare was bought up in a time where men were the more powerful gender so that's all he knew. So yes I do think Shakespeare was a chauvinist, because that is all he knew at the time, men as the powerful gender. ...read more.