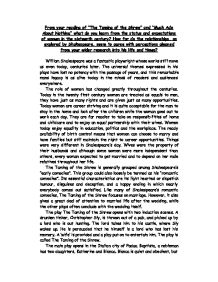 From your reading of &quot;The Taming of the Shrew&quot; and &quot;Much Ado About Nothing&quot; what do you learn from the status and expectations of women in the sixteenth century?

From your reading of "The Taming of the Shrew" and "Much Ado About Nothing" what do you learn from the status and expectations of women in the sixteenth century? How far do the relationships, as explored by Shakespeare, seem to agree with perceptions gleaned from your wider research into his life and times? William Shakespeare was a fantastic playwright whose works still move us even today, centuries later. The universal themes expressed in his plays have lost no potency with the passage of years, and this remarkable mans legacy is as alive today in the minds of readers and audiences everywhere. The role of women has changed greatly throughout the centuries. Today in the twenty first century women are treated as equals to men, they have just as many rights and are given just as many opportunities. Today women are career striving and it is quite acceptable for the man to stay in the home and look after the children while the woman goes out to work each day. They are far readier to take on responsibilities of home and childcare and to enjoy an equal partnership with their wives. Women today enjoy equality in education, politics and the workplace. The ready availability of birth control means that women can choose to marry and have families but still maintain the right to career opportunities. Things were very different in Shakespeare's day. Wives were the property of their husbands and although some women were more independent than others, every woman expected to get married and to depend on her male relatives throughout her life. The Taming of the Shrew is generally grouped among Shakespeare's "early comedies". This group could also loosely be termed as his "romantic comedies". Its essential characteristics are its light hearted or slapstick humour, disguises and deception, and a happy ending in which nearly everybody comes out satisfied. Like many of Shakespeare's romantic comedies, The Taming of the Shrew focuses on marriage. ...read more.

She is speaking to her sister and Hortensio's widow, about how a wife must be subservient to her husband because she now belongs to him. Her words are: " Thy husband is they Lord, thy life, thy keeper They head, they sovereign; one that cares for thee... ...My mind has been as big as one of yours My heart as great, my reason haply more To bandy word for word, and frown for frown But now I see our lances are but straws." The above mainly outlines the aspects of the play that show similarities with perceptions of the time in which it is set, however, there are also many differences. Shakespeare leads us into suspecting that Katherine may not be truly tamed but is just very cleverly playing along with what Petruchio would like, this way she gets what she wants and is able to lead an easy life. This is unlikely, women in the sixteenth century usually had the utmost respect for there husbands and would not even begin to think of deceiving them. Shakespeare has probably allowed us think along these lines as it leaves the play open to interpretation and allows for a much more open and interesting end to the story. This way the play is something out of the ordinary and will stay in the reader or audiences mind long after it has finished. The fact that after the wedding both Bianca and Hortensio's widow refuse to obey their husbands commands also shows a spirit not expected of women of that time. Much Ado About Nothing is also one of Shakespeare's plays loosely termed as his "romantic comedies" it shares many of the same essential characteristics being a story of reluctant love and sexual confrontation. It is set in Messina, Sicily. The governor Leonato, and his daughter Hero, and her cousin Beatrice (Antonio's daughter) learn from a messenger that Don Pedro has won victory in a battle and is returning home. ...read more.

In fact in the play it is almost as if Beatrice has tamed Benedick. She has found a man who once vowed to remain a bachelor until the day he died but falls in love and is prepared to marry her, make her happy and treat her on equal terms. In Benedick's words: "In brief, since I do propose to marry, I will think nothing to any purpose that the world I can say against; and therefore never flout at me for what I have said against it; for man is not a giddy thing; and this is my conclusion." The fact that Shakespeare introduced a relationship where both the man and the woman treated each other as equals suggests to me that Shakespeare has a positive attitude towards women; he believes that their opinions should be valued and they should be treated with respect. However this totally contradicts the ideas that come across from the way he discussed the situation Hero found herself in. What was Shakespeare's attitude towards women and does he really show his feelings within his writing? In conclusion I would say that the plays The Taming of the Shrew and Much Ado About Nothing in general do fit in with perceptions of typical sixteenth century courtship and marriage which I have gathered from my wider research into Shakespeare's life and times. I feel that Shakespeare's attitude to women was what was to be expected of any man living in this period. His beliefs came from those of the people he had grown up with and they were nothing out of the ordinary. I believe that any differences found in his writings were added to make the plays seem more exciting. At the time it would have seemed almost rebellious for people to think in such ways and this would have made Shakespeare a popular playwright as he was introducing new ideas, however preposterous they seemed at the time. We could say that the ideas portrayed in Shakespeare's plays were ahead of the time in which they were set, however unintentional this may be. ...read more.