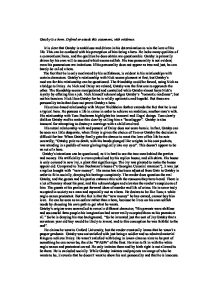 Gatsby is a hero. Defend or attack this statement, with evidence.

Gatsby is a hero. Defend or attack this statement, with evidence. It is clear that Gatsby is ambitious and driven in his determination to win the love of his life. This can be confused with his perception of him being a hero. He lacks many qualities of a conventional hero, and the qualities he does obtain are questionable. Gatsby is primarily driven by his own will to succeed which seems selfish. His true personality is not evident, even his possessions are imitations. If his personality does not appear as true and just, he can barely be called a hero. The fact that he is only motivated by his selfishness, is evident in his relationships with certain characters. Gatsby's relationship with Nick seems pleasant at first, but Gatsby's motives for this relationship can be questioned. The friendship could be forced, using Nick as a bridge to Daisy. As Nick and Daisy are related, Gatsby was the first one to approach the other. The friendship seems manipulated and controlled while Gatsby almost buys Nick's loyalty by offering him a job. ...read more.

This doesn't appear to be an act of a hero. Gatsby's intentions can be questioned, as it is hard to see the true man behind the parties and money. His artificiality is even symbolised by his replica house, and silk shirts. His house is only covered in new ivy, a plant that signifies age. The ivy was planted to make the house appear old. Compared to Tom Buchanan's house ("a Georgian Colonial mansion"), it was just a replica bought with "new money". His name has also been adjusted from Gatz to Gatsby in order to fit in socially, denying his heritage completely. The reader does question the real Gatsby, and the guests and his parties enhance this with the rumours they have heard. There is a lot of hearsay about his past, and this acknowledges and elevates the reader's suspicions of him. The guests at his parties put forward ideas of murder and life of crime. He is never truly accepted in society as a man and especially not as a hero. ...read more.

He is excluded socially. While Gatsby imitates and projects an image of who he wants to be, it reveals that he doesn't want to show his real personality and that he is insecure. The characteristics that he does display are not those of a true of a hero. He is not a survivor or brave, but does provide inspiration because of his drive to get what he wants. What we do see of Gatsby, is that he is unrealistic; "Gatsby gazed at a single green light, minute and faraway that might have been the end of a dock". He is involved in the negative part of the economic boom. Can be associated with greed, corruption, bootlegging and rising divorce rates. He is not part of The Great American Tradition but rather a tragic victim of the American dream. He is admired by Nick in particular, but more for being charismatic and romantic. His death is tragic and his ambitions are flawed. He meets his fate with nobility but not so much with courage. He is "Great" in his ambitions and lifestyle but this must not be confused with him being a hero. ...read more.