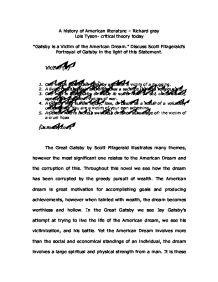 &quot;Gatsby is a Victim of the American Dream.&quot; Discuss Scott Fitzgerald's Portrayal of Gatsby in the light of this Statement.

A history of American literature - Richard gray Lois Tyson- critical theory today "Gatsby is a Victim of the American Dream." Discuss Scott Fitzgerald's Portrayal of Gatsby in the light of this Statement. Victim (n) 1. One who is harmed or killed by another: a victim of a mugging. 2. A living creature slain and offered as a sacrifice during a religious rite. 3. One who is harmed by or made to suffer from an act, circumstance, agency, or condition: victims of war. 4. A person who suffers injury, loss, or death as a result of a voluntary undertaking: You are a victim of your own scheming. 5. A person who is tricked, swindled, or taken advantage of: the victim of a cruel hoax (dictionary.com) The Great Gatsby by Scott Fitzgerald illustrates many themes, however the most significant one relates to the American Dream and the corruption of this. Throughout this novel we see how the dream has been corrupted by the greedy pursuit of wealth. The American dream is great motivation for accomplishing goals and producing achievements, however when tainted with wealth, the dream becomes worthless and hollow. In the Great Gatsby we see Jay Gatsby's attempt at trying to live the life of the American dream, we see his victimization, and his battle. Yet the American Dream involves more than the social and economical standings of an individual, the dream involves a large spiritual and physical strength from a man. ...read more.

She seems to constantly strive to keep herself busy by means of social interaction. "What'll we do with ourselves this afternoon...and the day after that, and the next thirty years?" In Daisy we see a perfect example of the materialism that her society so requires in her relationship with her daughter. "Your mother wanted to show you off." In a society that thrives on, and almost relies on, immediate physical indulgences, Gatsby simply feeds the appetite of the high class he wishes to be in by throwing extravagant parties. Again, in this we can see just how victimised Gatsby is by the dream, he is simply a man who entertains, no one appears to know him except for Nick, and nobody seems to care very much either. "He's just a man named Gatsby." Then, as soon as Gatsby has Daisy, all the parties stop. He is no longer bothered with extravagant parties or butlers, or servants or anything that shows him off to be very, very wealthy, he has gained what he wanted to achieve and so it does not matter any longer. "Gatsby had dismissed every servant in the house a week ago." Despite, this pause in Gatsby's lifestyle, Nick still describes Gatsby as restless, "Never quite still; there was always a tapping foot somewhere or the impatient opening and closing of a hand." From this point in the novel, it seems that Gatsby has shaken off the prospects of victimisation, he has gained love with Daisy; he no longer throws parties to fuel the wealthy people's lifestyle, he gets rid of any servants and even stops seeking friendship in Nick. ...read more.

It is not until Gatsby is dead; that we can see how truly victimised he is by the society he desperately longed to be in. Nick is the only person who makes funeral arrangements, simply because he is the only person who was really ever close to Gatsby. "Daisy hadn't sent a message or a flower." It appears that there are only three people to go to the funeral, Nick himself, Gatsby's father, and a man named "Owl Eyes" who was one of the many party goers. It is at this point that we really do feel sympathy for Gatsby, he was a true victim. Making his money for show, he had no true friends, no true money and no true love. His life revolved around his own scheming, causing him to be a victim of himself. By the end of the novel, we see Gatsby as a victim, not a great example of the American Dream. It is Nick's story that we understand, and therefore through the eyes of Nick that we see Gatsby, yet, because of this, there is a large element of us that feels fond of Gatsby, and drawn to him. But, at the back of our minds, we know that a large part of that fondness is due to pity and sympathy felt from Nicks behalf, Gatsby is merely weak, and impressionable, but with that we see naivety and stupidity, he appears love blind, which is the sole reason behind his need for money, class and materiality, thus creating a victim. ...read more.