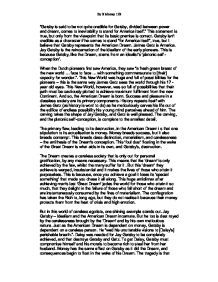 &quot;Gatsby is said to be not quite credible for Gatsby, divided between power and dream, comes to inevitability to stand for America itself.&quot; This statement is true, but only from the viewpoint that its basic premise is correct.

"Gatsby is said to be not quite credible for Gatsby, divided between power and dream, comes to inevitability to stand for America itself." This statement is true, but only from the viewpoint that its basic premise is correct. Gatsby isn't credible as a character if he comes to stand "for America itself", true, but I believe that Gatsby represents the American Dream. James Gatz is America. Jay Gatsby is the reincarnation of the idealism of the early pioneers. This is because Gatsby, like the Dream, stems from an idealist's 'platonic self-conception'. When the Dutch pioneers first saw America, they saw "a fresh green breast of the new world ... face to face ... with something commensurate to [their] capacity for wonder.". This New World was huge and full of possibilities for the pioneers - this is the same way James Gatz sees the world through his 17-year old eyes. This New World, however, was so full of possibilities that their path must be cautiously plotted to achieve maximum fulfilment from the new Continent. And so, the American Dream is born. ...read more.

But this 'dream' they achieve is warped, insubstantial and it makes the lives of those who attain it purposeless. This is because, once you achieve a goal it loses its 'special something' that made you chase it all along. This huge anticlimax after achieving man's last 'Great Dream' jades the world for those who attain it so much, that they delight in the failure of those who fall short of the dream and are instantaneously consumed by the fires of materialism. The conflagration has taken the Rich to, long ago, but they do not realise it because their money protects them from the heat of crisis and high emotion. But in this world of careless egotists, one shining example stands out. Jay Gatsby - Idealism and the American Dream incarnate. But he too is destroyed by the carelessness brought by the 'Dream' and by his own meticulous nature. Just as the American Dream is dependent on money, Gatsby is dependent on a careless person. ...read more.

With a helping hand from Tom to divert blame from them, Wilson seeks out Gatsby and kills him. Obviously in this case James Gatz is destroyed by Gatsby's death, but this is a metaphor for the true state of society in America as Fitzgerald saw it. Through the death of the Dream, the land suffers as well. Gatsby is a credible character because he grows form the mind of a great idealist and is ultimately destroyed by that selfsame idealism. If he is not plausible, neither is the dream, and that is a fact that people are not willing to accept, that is why the statement, and its underlying premise, is untrue. His death is a symbol for all to see that America is slowly dying by auto-asphyxiation, the more they pervert the dream, the closer their country comes to collapse. Yet as it was in The Great Gatsby, all those consumed by materialism cannot see it until it is too late, if at all, and that is the collapse Fitzgerald was talking about, the complete surrender of humanity to the almighty buck. By B Murray 12B ...read more.