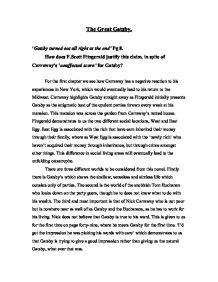 'Gatsby turned out all right at the end' Pg 8. How does F.Scott Fitzgerald justify this claim, in spite of Carraway's 'unaffected scorn' for Gatsby?

The Great Gatsby. 'Gatsby turned out all right at the end' Pg 8. How does F.Scott Fitzgerald justify this claim, in spite of Carraway's 'unaffected scorn' for Gatsby? For the first chapter we see how Carraway has a negative reaction to his experiences in New York, which would eventually lead to his return to the Midwest. Carraway highlights Gatsby straight away as Fitzgerald initially presents Gatsby as the enigmatic host of the opulent parties thrown every week at his mansion. This mansion was across the garden from Carraway's rented house. Fitzgerald demonstrates to us the two different social locations, West and East Egg. East Egg is associated with the rich that have earn inherited their money through their family, where as West Egg is associated with the 'newly rich' who haven't acquired their money through inheritance, but through crime amongst other things. This difference in social living areas will eventually lead to the unfolding catastrophe. There are three different worlds to be considered from this novel. Firstly there is Gatsby's which shows the shallow, senseless and aimless life which consists only of parties. The second is the world of the snobbish Tom Buchanan who looks down on the party goers, though he to does not know what to do with his wealth. ...read more.

It is ironic that it would be his wife that was driving the car that killed her husband's lover. This thus left a convenient way for Tom to 'get rid' of Gatsby. Daisy had already made her decision to leave Gatsby and stay with her husband. All Daisy really wants is security, wealth and status. Daisy would have had security and wealth with Gatsby but would not have had the social status. This is because Gatsby's wealth was 'new money'. This term meant that their money was not acquired from family inheritance but from other sources such as alcohol, which was banned in the 1920's. Gatsby is living in West Egg, the area associated with the 'new wealth', where as Tom lives in the fashionable East Egg of long island. In the novel, West Egg and its denizens represent the newly rich, while East Egg and its denizens, especially Daisy and Tom, represent the old aristocracy. Fitzgerald portrays the newly rich as being ostentatious and lacking in social graces and taste. People believe that Fitzgerald is guilty of glamorising the prohibition era. Fitzgerald gives Gatsby's parties a colourful description which is essentially imprudent. Gatsby's parties are full of jazz age music and alcohol, which are immortalised but not condoned by the party goers. ...read more.

With this perspective on the East Nick decides to leave the East Coast and to return to his home, in Minnesota. This is partially because we see that Nick wishes to do away with the eastern culture of wealth as he saw that it partially crushed Gatsby's dream. The crushing of Gatsby dream gave Nick a view of life that he should not live in the past but try and move forward, away from his past, Gatsby. Nick believes that Gatsby 'turned out all right at the end' because he started to diverge away from the traditional snobbish Eastern way of life from New York Throughout the novel we see that Nick's judgments of other characters are based on the morals he received from his father. Nick is able to make sense out of everyone but is unable to see around Gatsby but soon realises this is because Gatsby is so in love with the past that he will never be able to move on. Nick, on Chapter VIII turned to Gatsby "'you're worth the whole damn bunch put together'....... It was the only compliment I ever gave him," Nick elucidates to us that Gatsby was hated by many people but people could only like him for his one good characteristic of pursuing a dream. Nick tries to make us be sympathetic for Gatsby who had no true friends apart from Nick and who died alone and unloved. ...read more.