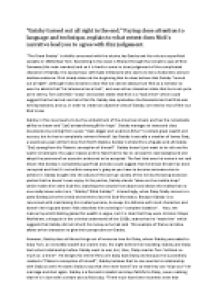 Gatsby turned out all right in the end. Paying close attention to language and technique, explain to what extent does Nicks narrative lead you to agree with this judgement

﻿?Gatsby turned out all right in the end.? Paying close attention to language and technique, explain to what extent does Nick?s narrative lead you to agree with this judgement. ?The Great Gatsby? is chiefly concerned with the elusive Jay Gatsby and his role as a superficial socialite in 1920s New York. Everything in the novel is filtered through the romantic eyes of Nick Carraway (the main narrator) and so it is hard to come to clear judgement of the complicated character of Gatsby, the eponymous self-made millionaire who seems to live a hedonistic and yet shallow existence. Nick clearly states at the beginning that he does believe that Gatsby ?turned out all right?, although it also becomes clear that we cannot always trust Nick as a narrator as even he admits that ?his tolerance has a limit?, and even other characters state that he is not quite as he seems; Tom calls Nick ?crazy? and Jordan states that Nick is a ?bad driver? which could suggest that he has lost control of his life. ...read more.

Also, the manner by which Gatsby gained his wealth is vague, but it is clear that they were criminal. Meyer Wolfshiem, a king-pin in the criminal underworld of the 1920s, states that he ?made him? which suggests that Gatsby did not inherit his money as he had said. This example of frame narrative allows other characters to give their perspective on Gatsby. However, Gatsby does all these things out of immense love for Daisy, whom Gatsby persuaded to leave Tom, an incredibly wealth but violent man, the night before their wedding. Gatsby and Daisy had a short relationship before Gatsby went to war, but, then, Daisy marries Tom ?without so much as a shiver?. He designs his entire life to win daisy back Daisy and because he successfully created a ?Platonic conception of himself?, Gatsby believes that he can rewrite his relationship with Daisy as well. He wants Daisy to say that she never loved Tom so that they can ?wipe out? her marriage and start again. Gatsby is a Romantic idealist and stays faithful to Daisy, never realising that he?s in love with a dream and as Nick says, ?There must have been ...read more.

and killed her. Wilson kills Gatsby because he believes that Gatsby was responsible for Myrtle?s death. This shows Gatsby to be both noble and gallant. Furthermore, Daisy?s love was not totally unachievable as ?she had told him that she loved him? and therefore, Gatsby?s quest for Daisy was not entirely disillusioned. However, Daisy doesn?t show the same commitment to Gatsby and his light sight of Daisy was when she was standing at her window before she ?turned out the light?. This intense image thrusts Gatsby back into isolation as Daisy? act of turning off the light symbolises the fact that she has thrown his dreams into darkness. I think that it is possible that Gatsby both ?turned out all right? and didn?t turn out ?all right?. The power of ?The Great Gatsby? lies in the ambiguous nature of the characterisation and we can be ?simultaneously enchanted and repelled? by Jay Gatsby, both criticising his immoral and extravagant behaviour while admiring his glamorous lifestyle, and sympathising with his emotional turmoil. Fitzgerald?s realistic portrayal of Gatsby which encompasses the complex human philosophy reflects the moral confusion of America in the 1920s and allows the reader to engage with Gatsby while remaining aware of his immorality. ...read more.