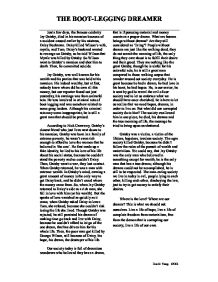 Gatsby was a victim, a victim of the lifeless, hopeless, loveless society.

Just a few days, the famous celebrity Jay Gatsby, died in his mansion because of a accident caused earlier by his mistress, Daisy Buchanan. Daisy killed Wilson's wife, myrtle, and Tom, Daisy's husband wanted to revenge on Gatsby, so he told Wilson that Myrtle was killed by Gatsby. So Wilson went to Gatsby's mansion and shot him to death. Then, he committed suicide. Jay Gatsby, was well known for his wealth and his parties that was held at his mansion. His indeed wealthy, but at first, nobody knew where did he earn all this money, but our reporter found out just yesterday, his earnings was from unlawful acts. He was involved in criminal acts of boot-legging and was somehow related to some gang leaders. ...read more.

But the sparks of love vanished as quickly as it came, when Gatsby asked Daisy to leave Tom, she refused, because she couldn't risk losing the life she lived. Though Gatsby was rejected, he still persisted his dream of making time go back and live with Daisy, because he couldn't afford to let go of the one dream, that has driven him for his whole life. Then, the poor man got killed by George Wilson, still because of Daisy, his hope, his dream, the destroyer of his life. Our society today is full of dreamless wonderers who believed they have a dream, that is if pursuing material and money counts as a proper dream. What are human beings without dreams? Are they still considered as 'living'? ...read more.

Gatsby was a victim, a victim of the lifeless, hopeless, loveless society. The ogre society killed Gatsby, because he didn't follow the rules of the pursuit of wealth and materialism. We could say, that Jay Gatsby was the only man who believed in something except for wealth, he is the only man that has a true dream; although his dreams could not be accomplished, he is still to be respected. The man-eating society we live in today is evil, people lying to each other, killing each other, disobeying the law, just to try to get money to satisfy their desires. Where is the love? Where are our dreams? This is what we should ask ourselves. Live a life of hope, live a life of complete freedom from materialism, free from the demon that is corrupting our society; live a life of our own. ?? ?? ?? ?? THE BOOT-LEGGING DREAMER David Yang. 12GG. ...read more.