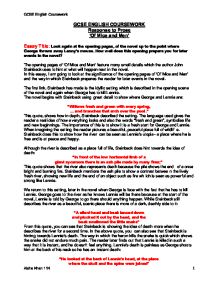 GCSE ENGLISH COURSEWORK Response to Prose 'Of Mice and Men' Essay Title: Look again at the opening pages, of the novel up to the point where George throws away Lenny's mouse. How well does this opening prepare you for later events in the novel? The opening pages of 'Of Mice and Men' feature many small details which the author John Steinbeck uses to hint at what will happen next in the novel. In this essay, I am going to look at the significance of the opening pages of 'Of Mice and Men' and the way in which Steinbeck prepares the reader for later events in the novel. The first link, Steinbeck has made is the idyllic setting which is described in the opening scene of the novel and again when George has to kill Lennie. The novel begins with Steinbeck using great detail to show where George and Lennie are: "Willows fresh and green with every spring, ... and branches that arch over the pool." This quote, shows how in depth, Steinbeck described the setting. The language used gives the reader a real idea of how everything looks and also the words "fresh and green", symbolise life and new beginnings. ...read more.

Steinbeck shows Lennie's obsession for a final time and this proves fatal for both Lennie and Curley's wife. After Lennie has killed the pup, he is found by Curley's wife in the barn. She insists that he talks to her, as being a woman in those times meant facing extreme prejudice and lack of rights, - so therefore she could only really talk to her husband. While they are talking they come to the subject of Lennie liking soft things, she then tells him to touch her hair, which he does. As Lennie doesn't let go, there is a struggle and this results in Curley's wife being killed: "Lennie said, "Oh! That's nice", and he stroked harder. ... She jerked her head sideways, and Lennie's fingers closed on her hair and hung on. "Let go," she cried" From this quote you can see how easily frightened and scared Lennie gets, as his grip on Curley's wife gets tighter and she starts to scream. It is also obvious to the reader that when she asks Lennie to touch her hair nothing good will happen as, Steinbeck has already prepared the readers throughout the novel that anything soft he touches dies. ...read more.

The language used ("grinned with relief") shows how happy Lennie is to have someone like George to look after him. The above opening prepared the reader, by showing the reliance Lennie has on George and the bond between them, which is a major theme in the novel Steinbeck shows Lennie's dependence on George later on in the novel, when he has a fight with Curley: "He cried, "Make 'um stop, George." "... The big face was covered with blood. George yelled again, "I said get him." This quote shows Lennie's dependence on George, as he is getting hit by Curley but does not hit back until George has told him to. The language used, portrays a scared and frightened Lennie. The words "he cried" show how desperate Lennie is and how much in pain he is. In the above quote George has to shout at Lennie to get him, this shows that Lennie will not defend himself and fight back unless George tells him to. In conclusion, I think the opening of 'Of Mice and Men' prepares the reader for many important events, and when the novel is finished the reader thinks about the significance of the events which made it an enjoyable book. GCSE English Coursework 1 Aisha Khan 11N ...read more.