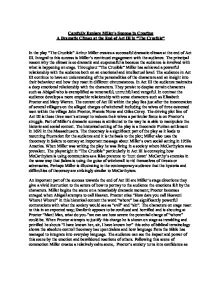 GCSE Essay on Act III of the Crucible

Carefully Explore Miller's Success in Creating A Dramatic Climax at the End of Act III in "The Crucible" In the play "The Crucible" Arthur Miller creates a successful dramatic climax at the end of Act III. Integral to this success is Miller's continued engagement with the audience. The principal reason why the climax is so dramatic and suspenseful is because the audience is involved with what is happening on stage. Throughout "The Crucible" Miller has achieved a powerful relationship with the audience both on an emotional and intellectual level. The audience in Act III continue to have an understanding of the personalities of the characters and an insight into their behaviour and how they react in different circumstances. In Act III the audience maintains a deep emotional relationship with the characters. They persist to despise certain characters such as Abigail who is exemplified as remorseful, untruthful and vengeful. In contrast the audience develops a more empathic relationship with some characters such as Elizabeth Proctor and Mary Warren. The context of Act III within the play lies just after the incarceration of several villagers on the alleged charges of witchcraft including the wives of three esteemed men within the village John Proctor, Francis Nurse and Giles Corey. ...read more.

This devotion towards each other contrasts with the beginning of Act II where there was a sense of awkwardness between the couple. Following Good Wife Proctor's ejection from the court-room, The Reverend Hale makes a passionate speech declaring his objection to the situation, "I may shut my conscience to this no more- private vengeance is working through this testimony". Miller perhaps uses Hale in this situation to represent the audience's opinion on stage, Hale is finally able to see clearly what is going on, and the audience is relieved that the lies of Abigail may be exposed. Furthermore there is a prospect of hope as Hale could possibly lead the demise of Abigail; he cries "This girl has always struck me as false". Once Abigail is under pressure and she is at risk of being undermined she is able to control the situation by creating an 'imaginary' scene. Abigail lets out a loud chilling cry, which would have tremendous impact on the audience and stunned both the other characters and perhaps the audience also into silence. Abigail and the rest of the girls pretend that Mary Warren has shape shifted into a "yellow bird" which would have bewildered an audience. ...read more.

To appeal intellectually to the audience of the play Miler, in particular the contemporary audience, Miller's underlying message is to illustrate the absurdity of McCarthyism by comparing it to the Salem witch-hunt. The engagement of the audience is crucial to the dramatic success of the whole play; this is because the drama occurring on stage at the climax of the play would be completely irrelevant if the audience were not motivated during the Act. The historical setting of the text itself is crucial to the dramatic success at the end of Act III. The context of a theocratic society greatly impacts upon the entire play, it adds to the hysteria, drama and ultimately the frustration of the audience. This is illustrated by all the main scenes within Act III involving religion such as Abigail's vision of Mary Warren sending her spirit upon her and the accusation of Proctor's dealing with the devil by Mary. In my opinion, I think that the theocracy is a major factor contributing to the dramatic success of the climax; it is the reason why Proctor's exclamation of "God is dead" is so powerful. Finally, to conclude, Miller's creation of a dramatically successful climax is based upon the importance of involvement with the audience and Miller's implementation of social and historical context in 'The Crucible". By Michael Youssef ...read more.