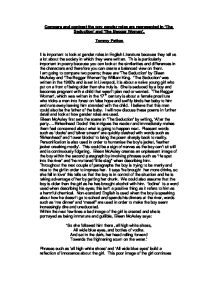 Compare and contrast the way gender roles are represented in 'The Seduction' and 'The Beggar Woman'. Tommy Patton It is important to look at gender roles in English Literature because they tell us a lot about the society in which they were written. This is particularly important in poetry because you can look at the similarities and differences in the characters and therefore you can create a balanced view on them. I am going to compare two poems; these are 'The Seduction' by Eileen McAuley and 'The Beggar Woman' by William King. 'The Seduction' was written in the 1980's and is set in Liverpool, it is about a na�ve young girl who put on a front of being older than she truly is. She is seduced by a boy and becomes pregnant with a child that wasn't planned or wanted. 'The Beggar Woman', which was written in the 17th century is about a female prostitute who tricks a man into forest on false hope and swiftly binds her baby to him and runs away leaving him stranded with the child. I believe that this man could also be the father of the baby. ...read more.

Despicable feminine void'. Here I think that the girl is realising how bad the situation she is in really is. There is more contrast used with the words 'starve' and 'huge and ripe' in order to again, show how bad her situation is. The poem finishes with the phrase, 'you always looked the type', here I believe that Eileen McAuley is trying to stereotype the girl into the sort of person who is seen as a tart, this links to earlier in the poem when the boy calls her a 'little slag'. This poem is split into two main segments, the first is where the boy seduces the girl and is totally dominant over her and the second is where the mood of the poem is flipped from being semi-romantic to the feeling of regret and anger at what the girl had done. I believe that if a young girl read this poem today it would have a huge impact on her decisions that she will make in the future and also if a boy were to read this poem it would show him how not to behave if you wanted to stay out of trouble. ...read more.

She outsmarted the man from the beginning. Yet another hint of the man being the baby's father is used when it says 'I trust the child to you with all my heart'. Finally the poem ends with the woman saying to the man 'But, ere you get.... you'll keep this'. I think that here the woman is saying before you get anyone pregnant or try to lead them into the woods like you did with me, try to deal with this one. Here she finally reveals here true character to the man. This poem shows that the woman turns out to be the more powerful gender and has completely outsmarted the man unlike in 'The Seduction' where the male is the gender with the power and the female is the one being controlled. Both of these poems represent gender roles in different ways but this may be due to the society in which they were written. There is a huge gap between the times in which the poems were written and I think this is the reason for the differences although in many respects the poems are quite similar as they both talk about deceit and both of the male characters could be seen as sexual predators. ...read more.