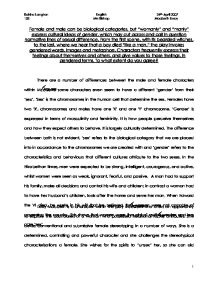 Female and male can be biological categories, but "womanly" and "manly" express cultural ideas of gender, which may cut across and call in question normative lines of sexual difference. From the first scene, with its bearded witches, to the last, where we hear that a boy died "like a man," the play invokes gendered words, images and metaphors. Characters frequently express their feelings about themselves and others, and give values to those feelings, in gendered terms. To what extent do you agree? There are a number of differences between the male and female characters within Macbeth; some characters even seem to have a different 'gender' from their 'sex'. 'Sex' is the chromosomes in the human cell that determine the sex. Females have two 'X', chromosomes and males have one 'X' and one 'Y' chromosome. 'Gender' is expressed in terms of masculinity and femininity. It is how people perceive themselves and how they expect others to behave. It is largely culturally determined. The difference between both is not evident, 'sex' refers to the biological category that we are placed into in accordance to the chromosomes we are created with and 'gender' refers to the characteristics and behaviours that different cultures attribute to the two sexes. In the Elizabethan times, men were expected to be strong, intelligent, courageous, and active, whilst women were seen as weak, ignorant, fearful, and passive. A man had to support his family, make all decisions and control his wife and children; in contrast a woman had to have her husband's children, look after the home and serve her man. When Edward the VI died, he wrote in his will that he believed that women were not capable of governing the country. This shows that women were thought of as the weaker and less able 'sex'. Lady Macbeth is a character within the play Macbeth who offers an opportunity to explore the boundaries of a woman who possessed traditional manly attributes. ...read more.

The Witches within Macbeth are the subject of much discussion in contemporary debates, the most popular and widely renowned question is that of the witches existence - are the witches real or not? This subject has interested a number of different people from all walks of life; York Notes for GCSE by James Sale writes, "there can be no definitive answer. Suffice to say, they embody a malign and demonic intelligence." This indicates that Shakespeare has written the Witches parts in such a way as to provide an opportunity for the audience to formulate their own opinions. During the Elizabethan period witches were a community of women who did not comply with the expectations and appearances of a natural woman. As James I and 11 of Scotland was extremely interested in Witchcraft, he wrote a book on the subject, entitled 'Daemonologie'. Being pronounced a witch would undeniably end with the death of that woman, during James I's reign. The Witches language is distinctive from all other verses spoken. The Witches use a trochaic tetrameter, which helps them to isolate themselves from the rest of the characters such as "GALL of GOAT, and SLIPS of YEW". They also speak in riddles, which provide imagery, metaphors and similes. Imagery is seen consistently when the witches cast spells, "Fillet of a fenny snake, / In the cauldron boil and bake:". Metaphors are utilised by the witches commonly to "Fair is foul, and foul is fair". Similes are seen when the witches say, "And now about the cauldron sing / Like elves and fairies in a ring,". The significant lines of which they say and repeat on a number of occasions is "Double, double toil and trouble, / Fire burn, and cauldron bubble." These lines are commonly repeated, therefore portraying its relevance. These lines also have rhymes, which creates the illusion of mystery and the supernatural. There is a strong utilisation of imagery, to provide a clearer representation of the witches to the audience. ...read more.

More sensitive parts of Macbeth are revealed through his recurrent soliloquies which lead him to moments of weakness. After he murders Duncan and sees Banquo's ghost, he has a moment of defencelessness, when the strength of his realisation threatens to emasculate him. Macduff and Macbeth are the two rival characters within Macbeth. Their wives are opposites from one another, as are the husbands; this creates the illusion of contradictions and the battles between good and evil. On receiving the news of their wives deaths, the two men act extremely differently, Macbeth simply broods on life's futility, "Creeps in this petty pace from day to day / To the last syllable of recorded time;" Macduff however, is distraught and continues to declare his grief throughout the rest of the scene, he says, "Give sorrow words; the grief that does not speak, / Whispers the o'erfraught heart and bids it break." Shakespeare uses this contrast to create empathy towards Macduff, and more dislike towards Macbeth. On the other hand, in the sense of masculinity and femininity, Macbeth is the more masculine as he does not portray any real emotion over his wife's death and Macduff is hysterically emotional, a characteristic of a female. Shakespeare has created Macbeth in such a way as to allow the surface reader to think that he was trying to challenge the gender roles in Renaissance literature, however, a closer study of the play would indicate differently. He in truth, abided by all the social hierarchy of sex and gender placements, adhering to all those conventional positions. Shakespeare gave the play the name 'Macbeth' to enable the reader to think that there were two protagonists; Macbeth and Lady Macbeth. Shakespeare uses the female and male characters to perpetuate to the established gender characters, however to create a more interesting and authentic play, so he has bartered certain qualities. ?? ?? ?? ?? Kaisha Langton English 24th April 2007 10E Mrs Bishop Macbeth Essay 1 ...read more.