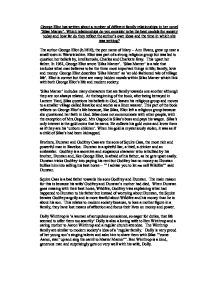 George Eliot has written about a number of different family relationships in her novel 'Silas Marner'. Which relationships do you consider to be the best models for society today and how far do they reflect the author's own ideas and the time in which she

George Eliot has written about a number of different family relationships in her novel 'Silas Marner'. Which relationships do you consider to be the best models for society today and how far do they reflect the author's own ideas and the time in which she was writing? The author George Eliot (b.1810), the pen name of Mary - Ann Evans, grew up near a small town in Warwickshire. Eliot was part of a strong religious group but was led to question her beliefs by, intellectuals, Charles and Charlotte Bray. This upset her father. In 1961, George Eliot wrote 'Silas Marner'. 'Silas Marner' is a tale that includes what man believes to be the three most important things in life; family, love and money. George Eliot describes 'Silas Marner' as 'an old-fashioned tale of village life'. Eliot is correct but there are many hidden morals within Silas Marner which link with both George Eliot's life and modern society. 'Silas Marner' includes many characters that are family towards one another although they are not always related. ...read more.

When Dunstan goes missing with their best horse, Wildfire, Godfrey tries explaining what had happened to Dunstan to his father but instead of worrying about Dunstan, the Squire berates Godfrey angrily and is more fearful about Wildfire and his money than he is about his son. This relates to modern society because, to lose a mother figure in a family, they have lost means of affection and focus their lives on money and power. Dolly Winthrop is 'a woman of scrupulous conscience, so eager for duties, that life seemed to offer them too scantily' Dolly is also a loving wife to Ben Winthrop and a caring mother to Aaron Winthrop and a regular church attendee. The Winthrop family are similar to modern society's idea of a 'regular family. Dolly is very proud of her young son's singing talents and asks him to share them with Silas '"come Aaron, stan' up and sing the carril to Master Marner"'. ...read more.

Eppie grows up with Silas and refuses to be adopted by Godfrey and his wife Nancy. Ironically, Silas finds Eppie to represent the gold in his life after he mistook her for his gold previously. Eppie regains Silas's faith in God and through Eppie, Silas becomes friends with other villagers. Each family relationship in 'Silas Marner' is extremely different. Although, they are not related, I find Silas and Eppies relationship to be a fine example family life as they care for each other more than any other family does within the book. 'Silas Marner' relates to modern society because a death of a family member e.g. the Squire's wife affects the way the family lives. In modern society, there are many untraditional families, which is similar to 'Silas Marner' because Silas and Eppie are father and daughter but are not related, the Cass's live without a mother or a wife and Godfrey marries but has an affair. George Elliot reflects the book on her life which is a good technique in novel-writing because she can write about events and characters that are personal to her, and therefore, she can record more detail. ...read more.