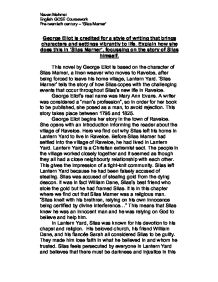 George Eliot is credited for a style of writing that brings characters and settings vibrantly to life. Explain how she does this in 'Silas Marner', focussing on the story of Silas himself.

George Eliot is credited for a style of writing that brings characters and settings vibrantly to life. Explain how she does this in 'Silas Marner', focussing on the story of Silas himself. This novel by George Eliot is based on the character of Silas Marner, a linen weaver who moves to Raveloe, after being forced to leave his home village, Lantern Yard. 'Silas Marner' tells the story of how Silas copes with the challenging events that occur throughout Silas's new life in Raveloe. George Eliot's real name was Mary Ann Evans. A writer was considered a "man's profession", so in order for her book to be published, she posed as a man, to avoid rejection. This story takes place between 1795 and 1825. George Eliot begins her story in the town of Raveloe. She opens with an introduction informing the reader about the village of Raveloe. Here we find out why Silas left his home in Lantern Yard to live in Raveloe. Before Silas Marner had settled into the village of Raveloe, he had lived in Lantern Yard. Lantern Yard is a Christian extremist sect. The people in the village worked closely together and it seemed as though they all had a close neighbourly relationship with each other. This gives the impression of a tight-knit community. Silas left Lantern Yard because he had been falsely accused of stealing. Silas was accused of stealing gold from the dying deacon. It was in fact William Dane, Silas's best friend who stole the gold but he had framed Silas. ...read more.

Molly Farren had been introduced briefly early in the book but in Chapter 12 she makes an appearance. Molly Farren is the wife of Godfrey Cass, but no one except Godfrey's brother knows this. If this secret is revealed then Godfrey's chance of becoming Nancy Lammeter's husband will collapse, Godfrey's father will disown him and everyone in the village would be outraged. It was New Years Eve and a party was held at Squire Cass's house for the people of Raveloe. Both Nancy and Godfrey were invited. This was Godfrey's chance to flatter Nancy. On her way to the Squire's party, a drunken Molly Farren, Godfrey's wife, walked with their baby girl in her arms. She planed to crash the party and reveal that she is Godfrey's wife so that she could avenge Godfrey's desertion. Before she could make it to the Squire's, Molly fell asleep from the opium and fell onto the snow, the little girl escaping Molly's arms. The child followed the path of a bright light, all the way to Silas Marner's cottage and through the open door. Silas did not see the child enter because he suffered from cataleptic fits. When he regained consciousness, he saw something gold on the floor and thought that his gold had returned to him. However, he found out that the gold on his floor is not money, but the golden hair of a sleeping child. Silas managed to think beyond the beautiful sight of the little girl to go outside and see the dead body of Molly Farren. ...read more.

Silas talked to Dolly about the disappointment of not finding the chapel and the minister and feared that his dark past might never be cleared. However, Silas agrees with Dolly in that there was goodness and right in this world, as long as he trusts. Eppie and Aaron were married on a beautiful day with their family present. Nancy's sister and father accompanied Eppie to her to the wedding, for Godfrey was suddenly out of town. The villagers agree that Silas had brought a blessing to himself by taking in a lone, abandoned child. Eppie and Aaron lived with Silas on his property, which had been enlarged by Godfrey. After the wedding, Silas, Eppie and Aaron talk about making a garden for Eppie. The making of the garden symbolises the making of a new start. I enjoyed this book very much. I have only read one other book written pre-twentieth century, which I also enjoyed reading. The events which occur are gripping, and there are sad and happy times but in all I very much enjoyed this book. Reading about a different time period is interesting, because it is tedious reading the same thing over. Overall this was a pleasant read. Change the ending to this: Overall, I thoroughly enjoyed reading this book. Eliot's description of events is gripping and incorporates sad and happy times, which adds to the enjoyment of this novel. As the story develops, the moral values of honesty and kindness are taught and it's different to other pre-twentieth century novels because it is an odd vision of the world to write about for those times. Nazan Mehmet English GCSE Coursework Pre-twentieth century - 'Silas Marner' ...read more.