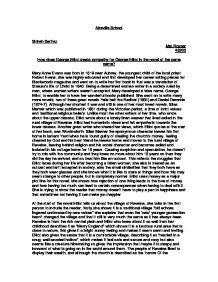 George Elliot- How sympathy is created for Silas Marner the eponymous character.

Aireville School Sidrah Sarfraz Mrs Rosser 48263 How does George Elliot create sympathy for George Elliot in the novel of the same name? Mary Anne Evans was born in 1819 near Aubrey, the youngest child of the local priest Robert Evans, she was highly educated and first developed her career writing pieces for Blackwoods magazine and went on to write her first book in that was a translation of Strauss's life of Christ in 1846. Being a determined woman writer in a society ruled by men, where women writers weren't accepted; Mary developed a false name, George Elliot, to enable her to have her wonderful books published. She went on to write many more novels, two of these great novels Felix halt the Radical (1866) and Daniel Deronda (1874-7). Although her shortest it was and still is one of her most loved novels, Silas Marner which was published in 1861 during the Victorian period, a time of strict values and traditional religious beliefs. Unlike most the other writers of her time, who wrote about the upper classes, Elliot wrote about a lonely linen weaver that lived exiled in the rural village of Raveloe. Elliot had humanistic views and felt empathetic towards the lower classes. Another great writer who shared her views, which Elliot quotes at the start of her book, was Wordswiorth. Silas Marner the eponymous character leaves his first home in lantern Yard when he is found guilty of stealing the church's money, feeling cheated by God and his best friend he leaves home and moves to the rural village of Raveloe, leaving behind religion and his social character and becomes exiled and isolated in his cottage home for 15 years. ...read more.

When Silas was ever interrupted by the boys while working "he would fix on them a gaze that was always enough to make them take to their legs in terror" he would glare at them but because of the stories about spells they were petrified, these weren't only fears about the children believed but the adults also believed the stories about him. Elliot portrays these prejudices the people of Raveloe believed to make the reader feel sympathetic towards Silas and tried to put across that these weren't true but still existed in real life and in the novel. Elliot wanted ordinary people to be able to reflect the novel to every day life and the prejudices that exist; this is why it still appeals to the readers today as much as when it was first published. Elliot implies that the two towns Lantern Yard and Raveloe are very different, "nothing could be more unlike the native town, set within sight of the wide spread hillsides than this low wooden region". He is saying that Raveloe was lovely and green but Raveloe is lovely and green but Lantern Yard was not. Elliot describes the church in Lantern Yard, when Silas went there as a young man, "the white-washed walls; the little pews", this whole description presents to the reader a close religious community. His best friend William Dane cheated him setting him up to so he was falsely accused of stealing money. He remained determined that God would clear him, as he knew he was innocent but when the lots were drawn he was found guilty. ...read more.

Her saying that she wanted to stay with him soothes both Silas' and the reader's minds as they can see that he is getting something good despite all the knockbacks he has had in the past. To conclude Elliot used may effective techniques to create sympathy for Silas Marner; there is a lot of dramatic terminology when Silas is accused of doing something when really he is innocent. Elliot was expressing that large amounts of money don't make anyone completely happy. It was set prior to the industrial revolution, and so making the villagers seem old-fashioned compared to the reader. Elliot also uses irony to ridicule the country folk, as they are suspicious of everything that Silas does when he first arrives. Elliot shows how life and attitudes are changing throughout the novel. When Silas tells Eppie about how he used to count his money and how 'is soul was utterly desolate'. This is when he finds a fulfilment in other human beings. Silas also comes to believe that God was good to him form feeling dishonestly of what had happened earlier. Elliot shows that money doesn't make anyone a better person or let you have the best, at the end the Squire had no one to give his inheritance to so it was of no use to him, just as Silas' money was of no use to him when he never spent it. Elliot also uses things such as the weather to add impact, like when he goes outside to look at the snow Eppie comes to him. ...read more.