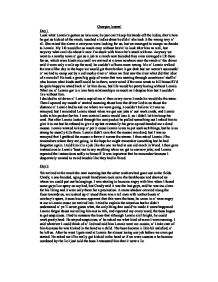 Look what Lennie’s gotton us into now, he just can’t keep his hands off the ladies, that’s how he got us kicked of the ranch, touched a ladies dress he did n’ she took it the wrong way n’ all. She raised the alarm n everyone were looking for us, but we managed to escape no thanks to Lennie. My life would be so much easy without havin’ to look after him as well, but anyway what can I do about it now I’m stuck with him n he’s stuck with me. Anyway we went to a nearby town n’ got us a job in a ranch near Soledad they even arranged a lift there for us, which were kinda nice until we arrived at a town nowhere near the ranch n’ the driver said it were only a mile up the road, he couldn’t of been more wrong. Me n’ Lennie walked the rest of the day in the hope we would get there before it got dark but we weren’t successful n’ we had to camp out by a old murky river n’ when we first saw the river what did that idiot of a man do? He took a great big gulp of water that was running through countries n’ stuff n’ who knows what kinda stuff could be in there, never mind if the man wants to kill himself I’d be quite happy to stand back n’ let him do so, but life would be pretty boring without Lennie. What me n’ Lennie got is a love hate relationship n as much as I despise him but I couldn’t live without him.

I decided to sit down n’ Lennie copied me n’ then every move I made he would do the same. Then I opened my mouth n’ started moaning about how the driver lied to us about the distance n’ Lennie had to ask me where we were going, I couldn’t believe it I was so annoyed, but I reminded Lennie about when we got our jobs n’ our work cards, and Lennie looks in his pocket for his. I was certain Lennie would lose it, so i didn’t let him keep his card. But after Lennie looked through his coat pocket he pulled something out I asked him to give it to me but he refused to give it up but eventually his gave up and handed me a dead mouse. Lennie wanted to keep n’ pet it cause Lennie loves to pet such soft things, but he is so strong he usually kills them. Lennie didn’t care that the mouse was dead, but I was so annoyed that I grabbed the mouse n threw it across the stream. I then asked Lennie if he remembers where they are going, in the hope he might remember something but he had forgotten again. I told him it is a job like the one we had at our old ranch in Weed. I then gave instructions to Lennie ‘bout not to say anything when we get to our new jobs, and Lennie repeated the instructions softly to himself. It was important that he remember because I desperately wanted to avoid trouble like they had in Weed.

We arrived at the ranch the next morning but the other workers had gone out to the fields. Candy, a one-handed, aging ranch handyman took us to the bunkhouse and showed us where we could put our belongings. I was starting to become angry with him when I found some guys lice spray on my bed, but Candy said it was the last guys, said he was too clean for his liking and it were only there for a precaution. A mans shadow crawled along the floor towards us, we looked up n’ stood there was a tall man with leather boots n’ cowboy’s spurs, it soon became apparent that this were the boss, he came in n’ were angry at me n Lennie cause we arrived late. I tried to explain the situation but he didn’t understand n’ ya’ll never guess what, the only thing that could’ve made it worst happened Lennie forgot about me telling him not to talk, and repeated my every word, the boss began to get suspicious. I had to reassure the boss that although Lennie ain’t bright, he could work pretty hard. He stayed suspicious, n’ he asked me what kind of scam I were running. I said whatever I could think of n’ lied and told him Lennie were me cousin, n’ I take care of him because he was kicked in the head as a child. The boss became a little bit satisfied, n’ he left us. After he went I gots mad at Lennie for almost losing our job before we even got started. He asked me if he really got kicked in the head or if we were cousins n he became confused by the lie I just told the boss I reassured him that it were a lie.

Candy came back into the bunkhouse and behind him trailed anold sheepdog, me n’ him started to talk ‘bout the boss when a man named Curley came into the bunkhouse, Curley were the bosses son so he thought he had the right to boss us around. Curley was small and wearing high-heeled leather boots to try and distinguish himself from the field hands n’ I was informed later by Candy that he were strong, n’ a former boxer. He started to become defensive when he saw Lennie. You see Curley came in looking for his father, the boss, and he too became suspicious of Lennie just like his father. He became angry, when Lennie didn’t answer his question n’ yelled at him that next time he better speak when he is asked a question. He then left to try n’ find his father. I told Lennie to stay clear of him, as I didn’t want him to cause trouble. Later on a we were finishing unpacking Curley’s wife glided into the bunkhouse and inquired about the whereabouts of Curley, I informed her that he weren’t here n’ she looked at me all flirtatious. She wore fancy, feathered red shoes n’ a dress that you could she halfway up her legs in. Her sexiness didn’t temp me at all, I though she was too overdressed to be living on a ranch. Any way as soon as she left Lennie mentioned how pretty she was, and it triggered the memory of what happened in Weed n’ I yelled at him to stay away from her but having two people to steer clear of was too much for Lennie, n’ he became frightened and upset. He asked me if we could leave but we still had money we needed to raise for our dream, to buy a farm and raise their own food and animals. Lennie gets very excited when I tell him this because there will be rabbits for him to pet.