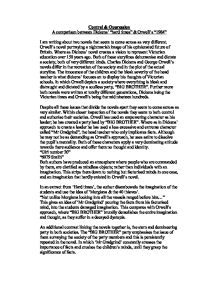 Control & Oppression A comparison between Dickens' "hard times" & Orwell's "1984" I am writing about two novels that seem to come across as very different. Orwell's novel portraying a nightmarish image of his opinionated future of Britain. Where as Dickens' novel creates a vision to represent Victorian education over 150 years ago. Both of these storylines dehumanise and dictate a society, both of very different kinds. Charles Dickens and George Orwell's novels differ in the recreation of the society and in the plot of the actual storyline. The innocence of the children and the bleak severity of the head teacher is what dickens' focuses on to display his thoughts of Victorian schools. In which Orwell depicts a society where everything is bleak and distraught and dictated by a soulless party, "BIG BROTHER". Further more both novels were written at totally different generations, Dickens being the Victorian times and Orwell's being the mid nineteen hundreds. ...read more.

In an extract from 'Hard times', the author disembowels the imagination of the students and use the idea of 'Morgiana & the 40 thieves'. "Not unlike Morgiana looking into all the vessels ranged before him..." This gives an idea of 'Mr Gradgrind' pouring the facts from his factorised mind, into the students damaged imagination. This compares with Orwell's approach, where "BIG BROTHER" brutally demolishes the entire imagination and thought, as they suffer in a decayed dystopia. An additional contrast linking the novels together is, the stern and domineering party in both societies. The "BIG BROTHER" party emphasises the issue of them surveying the society of the party members and this is persistently repeated in the novel. In which 'Mr Gradgrind' constantly stresses the importance of facts and crushes the children's minds, until they grasp the significance of facts. "In this life, we want nothing but facts, sir; nothing but facts" " BIG BROTHER IS WATCHING YOU" These two quotations illustrate the emphasis and constant repetition of the parties. ...read more.

Dickens expresses more scarce by using a metaphor to show his view of a leader, he also goes into more detail about the bold figure of 'Mr Gradgrind'. Not only do they link well in appearance, but also in attitude towards their society. Both seem to dictate, and show immense power on the regulations of their own society. In conclusion, I feel that both authors have created a society and atmosphere; that both link together and show many similarities. Although they may well both show differences, they don't even compare with the shear amount of evidence that link the novels together. Each author has created authority, control and power to create an atmosphere that can dictate a whole society. In this case the societies are very alike and the tone of speech used by each author is much the same. In my opinion, these two novels equally portray a society that can create a vision for the reader to see a glimpse of the past or what may be a glimpse of the future. Matt Taylor 795 words ...read more.