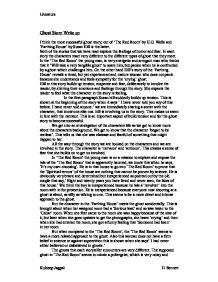 Ghost Story Write up I think the most successful ghost story; out of 'The Red Room' by H.G. Wells and 'Farthing House' by Susan Hill is the latter. Both of the stories that we have read explore the feelings of horror and fear. In each story the characters react very different to the different types of ghost that they meet. In the 'The Red Room' the young man, is very energetic and arrogant man who thinks that it 'Will take a very tangible ghost' to scare him, but panics when he is confronted by a ghost which challenges him. On the other hand Hill's story of the 'Farthing House' reveals a timid, but yet experienced and mature woman who does not panic because she understands and feels sympathy for the 'crying' ghost. Hill in this story builds up tension, suspense and fear, deliberately to involve the reader, by shirring their emotions and feelings through the story. She expects the reader to feel what the character in the story is feeling. In the first paragraph Susan hill suddenly builds up tension. This is shown at the beginning of the story when it says ' I have never told you any of this before. ...read more.

This supposed ghost also keeps knowledge of where the person is, this is shown when this ghost took 'another step towards' the storyteller. This ghost evidently is very scary and threatening, but at the end of the story, it is revealed that there was no ghost, it is just the fear aroused in the man, which caused him to suffer, this is shown by him when he says, 'That will not have light nor sound, that will not bear with reason, that deafens and darkens and overwhelms.' But the ghost in the 'Farthing House' is unconcerned for the people of the house but an only care for her own personal problems this is shown because the ghost only enters the room and 'cries' but does not harm anyone. The mans emotions in 'The Red Room' would be the same as most people when confronted with a ghost; scared! This is shown when he says, 'My hands trembled'. All his emotions were cluttered due to these ghostly appearances that go to his head. So he panicked, 'I dropped the matches...I stumbled and fell.' He was totally confused, could not think, 'frantic' with horror and his 'self-possession' had deserted him. ...read more.

All this is my personal response to the stories, and I prefer 'The Red Room' because it was a complete story because it explains why the things happened in the first place. I firmly believe that there is reason behind everything that is happening, be it mental or physical. In conclusion the man in 'The Red Room' coped badly with the supposed ghost and so was mentally and physically broken down as a result of the intense setting, his age (experience), his firm belief in logic and science and aggressive ghost. But the woman coped well because she was placed in a very relaxed setting, where all the characters are women; this resulted in better understanding due to the inner bonding. The ghost, who the women encountered, was not aggressive as the one the man encountered, she also did not have a firm belief against superstition. In content of what I have just written, I think 'Farthing House' is the most successful ghost story. The story 'Farthing House' has a better build up to the ghost. In the story the ghost is real and described well. Another strength of the story is that we empathise with the ghost. Literature Kuldeep Jagpal 11 Bennett ...read more.