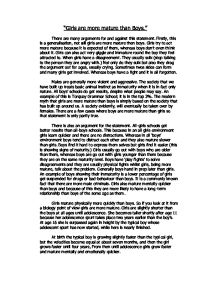 "Girls are more mature than Boys." There are many arguments for and against this statement. Firstly, this is a generalisation, not all girls are more mature then boys. Girls try to act more mature because it is expected of them, whereas boys don't even think about it. Girls can also act very giggle and immature round the boy they feel attracted to. When girls have a disagreement. They usually sulk (stop talking to the person they are angry with.) Not only do they sulk but also they drag the argument out for ages, usually crying. Sometimes twos sides can form and many girls get involved. Whereas boys have a fight and it is all forgotten. Males are generally more violent and aggressive. The society that we have built up treats basic animal instinct as immaturity when it is in fact only nature. All boys' schools do get results, despite what people may say. An example of this is Torquay Grammar School; it is in the top 3%. The modern myth that girls are more mature than boys is simply based on the society that has built up around us. A society evidently, will eventually be taken over by females. There are a few cases where boys are more mature than girls so that statement is only partly true. There is also an argument for the statement. ...read more.

Romeo seems to be losing control of his actions as the story goes on. He blames everything on the stars saying, "O I am fortunes fool." He then goings crying to Friar Laurence and rants and raves at him. He even says to Friar Laurence, " Thou canst not speak of that thou dost not feel," Romeo is just showing his adolescence here more than ever. He falls to the ground and starts to behave like a child. The Nurse even says: " Stand up, Stand up, Stand and you be a man." The Nurse is even telling Romeo that she thinks his behaviour is immature. Eventually Romeo seems to be coming on an equal maturity level with Juliet. As they say farewell to one another, Romeo is acting very maturely. However it does not last long, we are soon back to square one. Juliet then carries the rest of the story. Romeo is being dreamy once again. He rushes in without even thinking. If he had waited for a little longer he would have received the letter from Friar Laurence explaining the situation. But he rushes in and goes to the Apothecary, which is another sign of Romeo's immaturity and feebleness. He was carrying a knife; we know this because Juliet eventually kills herself with it. So why didn't he use it? Juliet's two speeches Juliet makes two long speeches in the story. ...read more.

Also women were told, " Wives be in subjection unto their own husbands in all things." However, Juliet thought she was going to be equal with Romeo once they married, she shows this by the way in which she takes control when they were experiencing their short lived courtship. She almost (meteorically speaking) makes Romeo sign a legalistic contract of marriage. Aristocrats married considerably earlier then other classes. Also parts of Juliet's maturity was she waited to 'consummate her love' until after she married. Furthermore woman of that time were taught to be very obedient and to obey their husbands. The family and society were cold and followed very strict rules and regulations. Also we must remember the two lovers lived in a very poetic age. To conclude, in Romeo and Juliet Shakespeare shows a young woman trapped in her sex and in society. She was made to follow very strict rules and regulations. It is oblivious from studying the story in detail that Juliet is considerably more mature than Romeo even though she is younger. Juliet is definitely the more logical and forward thinking of the two. She is devoted to Romeo. The story studies the life of the two characters up until their tragic death. From my research and looking at the story in detail, it is clear that girls are more mature then boys until a certain age. I have proved this by looking closely at the story, focusing on Juliet's speeches and behaviour and looking at the Elizabethan background. By Claire Gittoes ...read more.