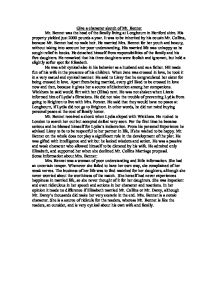 Give a character sketch of Mr. Bennet.

Give a character sketch of Mr. Bennet Mr. Bennet was the head of the family living at Longbourn in Hertford shire. His property yielded just 2000 pounds a year. It was to be inherited by his cousin Mr. Collins, because Mr. Bennet had no male heir. He married Mrs. Bennet for her youth and beauty, without taking into account her poor understanding. His married life was unhappy so he sought relief in books. He detached himself from responsibilities of the family and his five daughters. He remarked that his three daughters were foolish and ignorant, but held a slightly softer spot for Elizabeth. ...read more.

Wickham he said would flirt with her (Eliza) next. He was not shaken when Lizzie informed him of Lydia's flirtations. He did not take the trouble of preventing Lydia from going to Brighton to live with Mrs. Forster. He said that they would have no peace at Longbourn, if Lydia did not go to Brighton. In other words, he did not mind buying personal peace at the cost of family honor. Mr. Bennet received a shock when Lydia eloped with Wickham. He rushed to London to search her out but accepted defeat very soon. For the first time he became serious and he blamed himself for Lydia's indiscretion. ...read more.

She had an uncertain temper. Whenever she failed to have her own way, she complained of her weak nerves. The business of her life was to find matched for her daughters, although she never worried about the worthiness of the match. She herself had never experiences happiness in married life, so she never thought of it for her daughters. She was impatient and even ridiculous in her speech and actions in her character and reactions. In her opinion it made no difference if Elizabeth married Mr. Collins or Mr. Darcy, although Mr. Darcy's thousands did make her very ecstatic in the end. Mrs. Bennet is a comic character. She is a source of ridicule for the readers, whereas Mr. Bennet is like the readers, an outsider, and is very cynical about his own wife and family. ...read more.