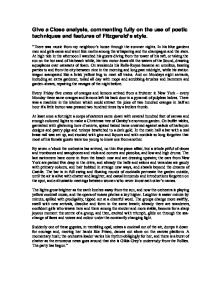 Give a Close analysis, commenting fully on the use of poetic techniques and features of Fitzgerald&amp;#146;s style.

Give a Close analysis, commenting fully on the use of poetic techniques and features of Fitzgerald's style. "There was music from my neighbour's house through the summer nights. In his blue gardens men and girls came and went like moths among the whispering and the champagne and the stars. At high tide in the afternoon I watched his guests diving from the tower of his raft, or taking the sun on the hot sand of his beach while, his two motor-boats slit the waters of the Sound, drawing aquaplanes over cataracts of foam. On weekends his Rolls-Royce became an omnibus, bearing parties to and from the city between nine in the morning and long past midnight, while his station wagon scampered like a brisk yellow bug to meet all trains. And on Mondays eight servants, including an extra gardener, toiled all day with mops and scrubbing-brushes and hammers and garden-shears, repairing the ravages of the night before. Every Friday five crates of oranges and lemons arrived from a fruiterer in New York - every Monday these same oranges and lemons left his back door in a pyramid of pulpless halves. There was a machine in the kitchen which could extract the juice of two hundred oranges in half an hour if a little button was pressed two hundred times by a butlers thumb. ...read more.

Here Fitzgerald uses lavish images and detailed description to introduce to the reader the extravagance of Gatsby's parties, which are representative of the excessive indulgence of the high society of the time. The chapter begins, "There was music in my neighbour's house through the summer nights", which immediately informs the reader that parties were a regular occurrence, alluding to the indulgence of the host. It is clear that Gatsby's parties involve drinking on a grand scale, so they were in themselves unlawful at this time of prohibition. The "five crates of oranges and lemons" that arrived every Friday are like Gatsby's guests; "every Monday [...they...] left his back door in a pyramid of pulpless halves", similarly to the guests who left when they had expended all energy through partying. The masses of "oranges and lemons" and constant references to "gins and liquors" and "cocktails [that] permeate the garden" provide an explanation for the chaotic and destructive behaviour and later in the chapter the inebriation of the guests is revealed. The extravagance relating to alcohol consumption is great; there is even a bar with a "real brass rail ... set up." Drink figures again later in a metaphorical manner, "laughter is easier minute by minute, spilled with prodigality, tipped out at a cheerful word." ...read more.

Similarly, the "turkeys bewitched to a dark gold" imply great wealth and maintain the aura of mystery surrounding Gatsby; every component is ostentatious and extravagant. Throughout the passage, Fitzgerald insinuates there is something sinister or immoral about Gatsby's guests; by comparing Gatsby's car, which ferries them to and from the parties, to a parasitic "brisk yellow bug", he instils a negative view in the reader. After writing of the food and drink at the parties, the pace quickens when Fitzgerald resumes the present tense, giving a sense of immediacy. The description remains visual with the brilliant colours and description of the lights that "grow brighter as the earth lurches away from the sun". This image implies a sudden change as the day ends and the guests lurch into party mode, with an additional connotation of reckless, drunken behaviour. The light is then described as "constantly changing", which parallels the action of the guests whose groups "change more swiftly, swell with new arrivals, dissolve and form in the same breath". The atmosphere approaches a climax in the final paragraph where there is a sense of urgency when "suddenly one of these gypsies, in trembling opal ... dances out alone on the canvas platform" under a "momentary hush". Finally, there is a "burst of chatter" as rumours circulate that she may be a celebrity before Fitzgerald simply states that, the "party has begun." (944 words) ...read more.