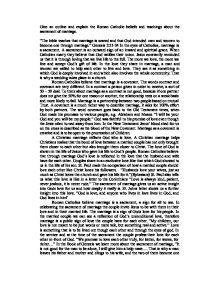 Give an outline and explain the Roman Catholic beliefs and teachings about the sacrament of marriage.

Give an outline and explain the Roman Catholic beliefs and teachings about the sacrament of marriage. "The bible teaches that marriage is scared and that God intended men and women to become one through marriage." Genesis 2:21-24 In the eyes of Catholics, marriage is a sacrament. A sacrament is an outward sign of an inward and spiritual grace. When Catholics marry they believe that God ratifies their union. Jesus constantly reminded us that it is through loving that we live life to the full. The more we love, the more we live and accept God's gift of life. In the love they share in marriage, a man and woman are called to help each other to live and love. They see it as something in which God is deeply involved in and which also involves the whole community. That is why a wedding takes place in a church. Roman Catholics believe that marriage is a covenant. The words contract and covenant are very different. In a contract a person gives in order to receive, a sort of 50 - 50 deal. To think about marriage as a contract is not good, because if one partner does not give the 50% for one reason or another, the relationship rests on a weak basis and more likely to fail. ...read more.

The marriage is a sign of Gods love for his people. In the married couple we can see a reflection of God's unconditional love, therefore marriage is a public sign of love the couple have for each other. "My children, our love is not meant to be just words or mere talk, but something real and active." Love is something that is to be lived out though each other and through the eyes of god. In the service and at the time of the sacrament the couple profess their love for each other in-front of God. "We promise to love each other truly, for better, for worse, for richer..." In the Book of Genesis we learn more about the sacrament of marriage, "It is not good for the man to be alone, I will give him a help mate.... That is why a man leaves his father and mother and clings to his wife, and the two of them become one body." Marriage is only made holy in the sacrament and it is a celebration shared with a community. Roman Catholics believe marriage is exclusive. To live out the sacrament of marriage to the full the couple must be prepared to love each other exclusively and their commitment of unconditional love and fidelity for the rest of their lives. ...read more.

Marriage is an exclusive relationship in that married people remain faithful to each other "Will you love and honour each other for life" In the Catholic church only annulment or death of one partner frees a person to remarry in the church. In the Church of England they teach that marriage is for life but accepts there may be circumstances where the vows can't be kept. The church prays for forgiveness and acknowledges for some divorce and remarriage. The Orthodox Church teaches wedding vows are taken with every intention of being kept but there are times this doesn't happen thus the couple should be realised from their vows. Some free churches say it is not the death of one of the spouses that end a marriage but the death of the love between the couple, so it is better to divorce than to live a lie. All denominations teach that marriage is for life; it is when things go wrong they take a different attitude. When things go wrong separation is not the only option, there is help groups such as RELATE and ACCORD who offer guidance for the couples who are finding married life difficult, these groups try to keep the marriage permanent by solving the problems that are causing the marriage to be difficult instead of avoiding the problem which can end in divorce. ...read more.