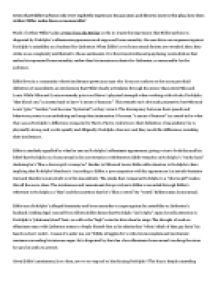 Given that Eddie Carbone only ever explicitly expresses his passions and desires once in the play, how does Arthur Miller make them so memorable?

Transfer-Encoding: chunked ﻿Given that Eddie Carbone only ever explicitly expresses his passions and desires once in the play, how does Arthur Miller make them so memorable? Much of Arthur Miller?s play A View from the Bridge works to create the impression that Eddie Carbone is disgusted by Rodolpho?s effeminate appearance and supposed homosexuality. He uses this as an argument against Rodolpho?s suitability as a husband for Catherine. When Eddie?s own homosexual desires are revealed, then, they strike us as completely antithetical to these sentiments. It is this irresolvable and perplexing contradiction that makes his repressed homosexuality, rather than his incestuous desire for Catherine, so memorable for the audience. Eddie lives in a community where intolerance greets any man who does not conform to the most parochial definition of masculinity, an intolerance that Miller clearly articulates through the minor characters Mike and Louis. ...read more.

Eddie remarks on Rodolpho?s ?wacky hair,? declaring he?s ?like a chorus girl or sump?m.? Similar to Mike and Louis, Eddie calls attention to Rodolpho?s hair, implying that Rodolpho bleaches it. According to Eddie, a preoccupation with his appearance is a strictly feminine trait and therefore casts doubt over his masculinity. The simile that compares Rodolpho to a ?chorus girl? makes this all the more clear. The intolerance and resentment this provokes in Eddie is revealed through Eddie?s reference to Rodolpho as ?that? and the assertion that he?s ?like a weird.? By ?weird,? Eddie means homosexual. Eddie uses Rodolpho?s alleged femininity and homosexuality to argue against his suitability as Catherine?s husband. Seeking legal counsel from Alfieri, Eddie claims that Rodolpho ?ain?t right.? Again he calls attention to Rodolpho?s ?platinum blond? hair, as well as the ?high? notes he hits when he sings. ...read more.

It?s likely that the ferocity of this expression of homosexual desire corresponds with the ferocity of Eddie?s suppression of that desire leading up to this moment. Furthermore, his ?laughing? suggests a frantic sense of relief. The aggressive expression of homosexual desire is incompatible with every impression we might have formed about Eddie before this moment, and we are left struggling to reconcile these two wildly disparate sides of his character. In summation, the homosexual passions and desires of Eddie Carbone are an astonishing revelation in Miller?s play, making them both unfathomable and memorable. Their eventual and painful expression leaves us wondering how well we know Eddie, despite having formed what appeared to be an accurate impression of him. It encourages us to consider more generally the extent to which any person's true nature is knowable when we can only observe them from the outside. (677 words) ...read more.