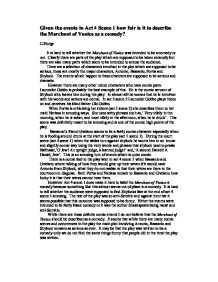 Given the events in Act 4 Scene 1 how fair is it to describe the Merchant of Venice as a comedy?

Given the events in Act 4 Scene 1 how fair is it to describe the Merchant of Venice as a comedy? C.Sturge It is hard to tell whether the Merchant of Venice was intended to be a comedy or not. Clearly there are parts of the play which are supposed to be taken seriously but there are also many parts which seem to be intended to amuse the audience. There are a selection of characters involved in the plot which are supposed to be serious, these are mostly the major characters, Antonio, Bassanio, Portia and Shylock. The events which happen to these charcters are supposed to be serious and dramatic. However there are many other minor characters who have comic parts. ...read more.

This scene was definitely meant to be amusing and is one of the comic high points of the play. Bassanio's friend Gratiano seems to be a fairly comic character especially when he is fooling around drunk at the start of the play (act 1 scene 1). During the court scene (act 4 scene 1) when the tables turn against shylock he taunts him in an ironic and slightly comic way using the very words and phrases that shylock used to praise Balthasar,'O Jew! An upright judge, a learned judge!' and,'A second Daniel! A Daniel, Jew'. This is an amusing turn of events which is quite comic. There is a comic feel to the play later in act 4 scene 1 when Bassanio and Gratiano where talking of how they would give up their wives ...read more.

It is hard to tell whether the audience were supposed to find Shylocks fate at the end of act 4 scene 1 amusing. The rest of the play was so anti-Semitic and against him that it seems possible that this outcome was supposed to be funny. Either the events were intended to be fairly black comedy or it was the author Shakespeare being racist and anti-Semitic. While there are these definite comic events I do not believe that the Merchant of Venice should be described as a comedy. It seems that while there are many comic scenes and occurrences in the play the main plot involving Antonio, Bassanio and Shylock remains as serious as ever. It may be that the play was written to be a comedy only we do not find the same things funny that people did in the time the play was written. ...read more.