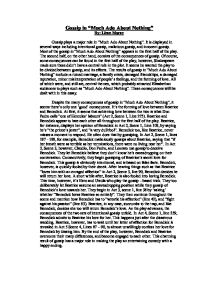 Hero's unfortunate fate seems sealed when finally Don Pedro explains to Leonato, somewhere in Act 2, Scene 1, that he actually intends on wooing Hero for Claudio. His intention is fulfilled when Hero and Claudio become engaged to each other in lines 229 - 230. This gives a fortunate ending to a short, yet somewhat sad and dangerous, set of events. A more dangerous consequence of gossip in "Much Ado About Nothing" is the danger caused to the friendship between Don Pedro and Claudio. In the beginning of the play, Claudio and Don Pedro are very good friends. The opening scene of "Much Ado About Nothing", for instance, lets the audience know the respect Claudio has earned from Don Pedro when fighting for him at war. Don John, however, wants to ruin that friendship, and so hurt Don Pedro. He does that by utilizing intentional and malicious gossip. In Act 2, Scene 1, lines 121 - 126, Don John and Borachio gossip about Don Pedro in the presence of Claudio. They say "he is enamoured on Hero", and that "he swore he would marry her tonight". Knowing of Claudio's intentions of marrying Hero, Don John successfully makes Claudio mistrust Don Pedro, who originally promised he would woo Hero for Claudio himself. ...read more.

In line 116, for example, he openly says he wishes his daughter to be dead, while in line 133, after reflecting upon the love he felt for Hero, he sadly concludes that her honor "is fallen into a pit of ink, that the wide sea Hath drops too few to wash her clean again". These tragic sets of incidents are only resolved in Act 5, Scene 1, when Dogberry and his watch manage to get the truth regarding Don John's doings from Borachio and Conrade. It is only in Act 5 Scene 4, however, that Claudio's and Hero's relationship is brought back to what it originally was. This is achieved by a marriage in which Claudio is surprised to find out he is re wed to Hero who he thought was dead. The happy ending given to this set of misfortunes brings the play to a close, thus concluding the play as a happy - ending comedy. Overall, gossip can be seen as the source of all the main events in "Much Ado About Nothing". It's responsible for love, hate and shame between the characters in the play. Gossip, as it seems, was Shakespeare's best device for developing an intricate and highly dramatized plotline. Its importance in the play is undisputed, and its usage was imperative for creating a highly emotional comedy by all standards. Both for Elizabethan, and modern audiences. ...read more.