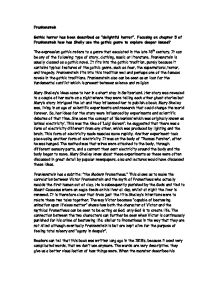 Gothic horror has been described as delightful horror

Frankenstein Gothic horror has been described as "delightful horror". Focusing on chapter 5 of Frankenstein how has Shelly use the gothic genre to explore deeper issues? The expression gothic refers to a genre that escalated in the late 18th century. It can be any of the following: type of story, clothing, music or literature. Frankenstein is usually classed as a gothic novel. It fits into the gothic tradition, purely because it contains typical features of the gothic genre, such as fear, the supernatural, terror, and tragedy. Frankenstein fits into this tradition well and perhaps one of the famous novels in the gothic traditions. Frankenstein also can be seen as an icon for the fundamental conflict which is present between science and religion Mary Shelley's ideas came to her in a short stay in Switzerland. Her story was revealed to a couple of her mate on a night where they were telling each other ghost stories but Mary's story intrigued the lot and they influenced her to publish a book. Mary Shelley was, living in an age of scientific experiments and research that could change the world forever. ...read more.

Victor goes searching for the monster but he falls ill and eventually dies, and the Captain of the ship finds the monster sobbing over Victor. The monster says that now his creator is dead he will have to die. The monster then departs to the Mountain to die. Chapter 5 describes how, on one stormy night, in the privacy of his apartment, Victor completes his creation. But when it is brought to life, its appearance horrifies him. Victor then goes to the next room and tries to sleep, but is awoken by a dreadful dream about his late mother and Elizabeth. He wakes up to find the monster towering above his bed, Victor rushes out of the house and spend the night in the courtyard below. He then goes in to town and meets Henry. They go to his apartment, but victor is surprised the monster is gone. Victor is weakened by the energy he has spent on creating the monster and falls ill. His illness lasts for several months, but with the help of Henry he soon gets better, Henry then passes him a letter from Elizabeth. ...read more.

Victor's illness also plays part in creating suspense. There are many themes in the story of Frankenstein. Some of the themes are: Religion, Science, abandonment and revenge. The themes which inflate a lot of issues are Religion and science. The novel raises awareness of the dangers of scientific knowledge has been used incorrectly, which a lot of scholars will argue for their rights of religion. In the 21st century science is still trying to create life but in the bible there are quotes that are against playing God: It is easy to see the day coming when designer humans could be created and perhaps another attempt at a super race. Adam and Eve were the first who attempted to gain the same knowledge that God possessed by eating the fruit from the tree of knowledge of good and evil in the Garden of Eden (Genesis 2:9, 16,17; 3:1-17). The stories of the Tower of Babel show us how mankind attempted to build a brick tower, whereby they could reach the heavens to be like God. God destroyed the tower and caused each group of people to speak languages that the other groups didn't understand (Genesis 11:4-5). Further on, Victor played god which broke the laws of god. ...read more.