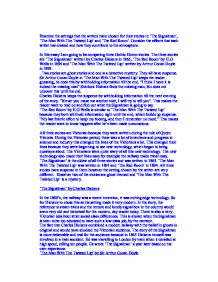 Gothic Horror stories. The three stories are 'The Signalman' written by Charles Dickens in 1865, 'The Red Room' by H.G Wells in 1894 and 'The Man With The Twisted Lip' written by Arthur Conan Doyle

Examine the settings that the writers have chosen for their stories in 'The Signalman', 'The Man With The Twisted Lip' and 'The Red Room'. Consider the effects that each writer has created and how they contribute to the atmosphere. In this essay I am going to be comparing three Gothic Horror stories. The three stories are 'The Signalman' written by Charles Dickens in 1865, 'The Red Room' by H.G Wells in 1894 and 'The Man With The Twisted Lip' written by Arthur Conan Doyle in 1891. Two stories are ghost stories and one is a detective mystery. They all have suspense. Sir Arthur Conan Doyle in 'The Man With The Twisted Lip' keeps the reader guessing, he does this by withholding information till the end. "I think I have it is indeed the missing man" Sherlock Holmes finds the missing man, but does not uncover this until the end. Charles Dickens keeps the suspense by withholding information till the next evening of the story. "If ever you make me another visit, I will try to tell you". This makes the reader want to read on and find out what the Signalman is going to say. 'The Red Room' by H.G Wells is similar to 'The Man With The Twisted Lip' because they both withhold information right until the end, which builds up suspense. "My last frantic effort to keep my footing, and then I remember no more." This makes the reader want to know happens after he's been made unconscious. All three stories are Victorian because they were written during the rule of Queen Victoria. During the Victorian period, there was a lot of inventions and progress in science and industry this changed the lives of the Victorians a lot. This changed their lives because they were beginning to see new technology, which began to bring questions about. The Victorians were quite wary of all this new technology. The new technology also made their lives easy for example the railway made travel easy. ...read more.

H.G Wells chose the title 'The Red Room' because the fear which is in the story takes place in the 'Red Room'. 'The Red Room' is written in first person "I can assure you". This is the narrator writing the story from his point of view. H.G Wells story contains a lot of language techniques, repetition is one "It's your own choosing" this builds up tension for the story as it makes the reader feel that something is going to happen. An appeal to the senses is also used in the story "I heard the sound of a stick". This shows the rear of the character. Another example of the senses is "My hands trembled so much". This shows the fear in the character this also brings the story to life. Personification is another technique "The shadows cover and cluster". This makes the setting come alive and is terrifying to the audience. Metaphors are also in the story "left an ocean of mystery", this enhances the comparisons it also gives added meaning, and this also shows that there are loads of hidden secrets. Similes also occur in this story "It was like a raged storm-cloud". He is comparing fear to a cloud this makes the comparison more interesting and clear. Effective verbs are used in the story "The echo's rang up". This shows that there is nothing moving only him. It also shows the spiral staircase is long. Effective verbs also makes the story more scary and effective. Another technique is short sentences for impact "This won't do" "What's up?" "Steady on!" This gives a punchy impact to show fear. "I turn to where the flames were still dancing between the glowing coals, and splashing red reflections upon the furniture, made two steps towards the gate, and incontinently the flames dwindled and vanished, and as I thrust the candle between the bars darkness closed upon me like the shutting of an age, wrapped about me in a stifling embrace, sealed my vision, and crushed the last vestiges of reason from my brain." ...read more.

In 'The Signalman' is constantly cold and is sometimes dark, it is set it a deep valley which means that as the sun doesn't go down into the valley it is constantly cold. The valley walls a very slippery as the rain water will run down it when it rains, this makes the zig zag path dangerous "clammy stones that became oozier and wetter..." In 'The Red Room' temperature is lightly to be cold as it is Lorraine castles, which only three disfigured people live in. There would have also only been fire places and there would not have been lit everywhere otherwise it wouldn't have been dark. In conclusion all of the three are gothic horror stories however 'The Man With The Twisted Lip' is a detective story the other two being 'The Red Room' also 'The Signalman' are ghost stories. All three stories also have a twist in the tale. The twist in 'The Signalman is that the Signalman's vision comes true and the narrator's thoughts are repeated by the workmen. In 'The Man With The twisted Lip' the twist is that there was no murder Mr St. Clair was just disguising himself. In 'The Red Room' the twist is that there are no ghosts just the mans fear. Two of the stories are based on real places and one is just imaginary. 'The Signalman' is set in a remote lonely signal box in the country next a railway line in a valley this is a real life place. 'The man With The Twisted Lip' is also based on a real life place it is set in the East London Docklands and an Opium den. However 'The Red Room' is set in an imaginary place, this is an old Lorraine castle. All three stories were written in the Victorian period however they were written in different years. 'The signalman was written inn 1865, 'The Man With The Twisted Lip' in 1891 and 'The Red Room' in 1894. All three stories are written in first person narrative. Some stories give more information about the narrator then others. ...read more.