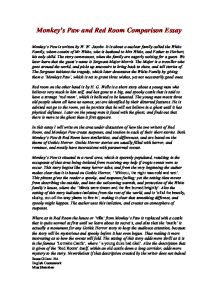 Monkey's Paw and Red Room Comparison Essay Monkey's Paw is written by W. W. Jacobs. It is about a nuclear family called the White Family, whom consist of Mr White, who is husband to Mrs White, and Father to Herbert, his only child. The story commences, when the family are eagerly waiting for a guest. We later learn that the guest's name is Sergeant-Major Morris. The Major is a traveller who goes around the world, and picks up souvenirs to bring back to show, and tell stories of. The Sergeant initiates the tragedy, which later devastates the White Family by giving them a 'Monkeys Paw', which is set to grant three wishes, yet not necessarily good ones. Red room on the other hand is by H. G. Wells is a short story about a young man who believes very much in him self, and has gone to a big, and spooky castle that is said to have a strange 'red room', which is believed to be haunted. The young man meets three old people whom all have no names, yet are identified by their distorted features. ...read more.

After the family has been excited, and made their first wish the internal workings of the audience are mostly relaxed yet on their toes, the writer makes the reader feel as if the following morning will be ordinary, ' There was an air of prosaic wholesomeness about the room which it had lacked on the previous night'. But the tension is then heightened, when a mysterious man turns up at the White's house to inform of Herbert's death, 'Three times he paused at the gate, and then walked on again', 'She brought the stranger who seemed ill at ease into the room'. In Red Room the plot begins near light and safety, 'I stood up before the fire'. This shows that both stories start near some sort of protection, and warmth, and then the two writers start to build suspension in different ways so as if to not fully conceal the main consequence of the characters actions within the stories from the reader. Tension is built up when the narrator is first alone, 'I shut them in and walked down the chilly, echoing passage'. The writer starts to use the tension, and suspense of the reader in the beginning, and builds up on it all, ...read more.

This makes us think that the distorted features add more suspense and tension to the story. The arrogance of the young man at the beginning contrasted with his fear after his ordeal shows us the dramatic change fear has had on him, ' I can assure you said I that it will take a very tangible ghost to frighten me', ' I stood undecided, an invisible hand seemed to sweep out the to candles on the table. With a cry of terror, I dashed at the alcove.' In conclusion to this essay I think that the most effective story was, The Red room as it used a wide range of vocabulary, physical imagery, and also a lot of suspense, and thrilling moments. Although in both these stories the writers decide to use a simple plot where the beginning of the story is nice, and pleasant, but then changes after a certain object or space is introduced, which develops the suspense, and tension leading to a dramatic fast, and quick ending in the eyes of the reader, I think that W. W. Jacobs did not effectively deliver his story as that of H. G. Wells. Raees Gillani 10A English Coursework Miss Shanahan ...read more.