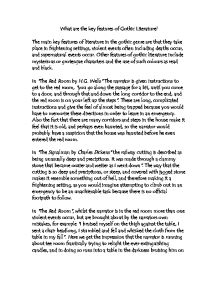 What are the key features of Gothic Literature? The main key features of literature in the gothic genre are that they take place in frightening settings, violent events often including deaths occur, and supernatural events occur. Other features of gothic literature include mysterious or grotesque characters and the use of such colours as read and black. In "The Red Room by H.G. Wells" The narrator is given instructions to get to the red room, "you go along the passage for a bit, until you come to a door, and through that and down the long corridor to the end, and the red room is on your left up the steps". These are long, complicated instructions and give the feel of almost being trapped because you would have to memorise these directions in order to leave in an emergency. Also the fact that there are many corridors and steps in the house make it feel that it is old, and perhaps even haunted, so the narrator would probably have a suspicion that the house was haunted before he even entered the red room. ...read more.

Another instance of a violent event in "The Red Room" is "I know I thought suddenly of the moonlit corridor, and, with my head bowed, and my arms over my face, made a run for the door. But I had forgotten the exact position of the door and struck myself heavily against the corner of the bed." In this instance the narrator realises that he must escape and remembers the moonlit corridor and in an attempt to reach it, makes a run for the door, but because it is dark and he cannot see the door, his guess at where it was, was inaccurate, and he runs into the corner of the bed. In "The Signalman", the lady on the train mysteriously dies, "A beautiful young lady had died instantaneously in one of the compartments, and was brought in here, and laid down on this floor between us." The cause of the death of the lady in the train is unknown, the signalman sees a confusion of hands and heads" and signals the train driver to stop, but the train drifts past another one hundred, perhaps one hundred and fifty yards more. ...read more.

of a stick and a shambling step on the flags in the passage outside, and the door creaked on its hinges as a second old man entered, more bent, more wrinkled, more aged even than the first." In "The Signalman" the signalman himself can be described as a mysterious character because he never socialises with anyone as he is always alone in his signal box. He gives us the impression that perhaps he is a lot happier on his own. He keeps himself entertained by studying algebra and learning different things. In "The Red Room" The use of colours such as red and black are commonly used because black symbolises darkness, and makes settings a lot more frightening than usual. The use of the colour red is significant because red symbolises blood, and death which are common features of gothic literature. In "The Signalman" the use of black in the nights sky also makes the seen more enclosing and frightening, and the red light at the end of the tunnel is mysterious because once again it not only symbolises death, but appears when ever the spectre is about to visit. ...read more.