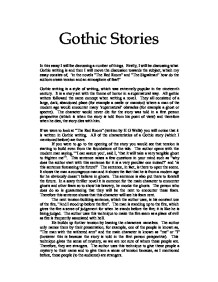 Gothic Stories In this essay I will be discussing a number of things. Firstly, I will be discussing what Gothic writing is and then I will move the discussion towards the subject, which my essay consists of, 'in the novels "The Red Room" and "The Signalman" how do the authors create tension and an atmosphere of fear?' Gothic writing is a style of writing, which was extremely popular in the nineteenth century. It is a story set with the theme of horror in a supernatural way. All gothic writers followed the same concept when writing a novel. They all consisted of a large, dark, abandoned place (for example a castle or mansion) where a man of the modern age would encounter many 'supernatural' obstacles (for example a ghost or spectre). The character would never die for the story was told in a first person perspective (which is when the story is told from his point of view) and therefore when he dies, the story dies with him. If we were to look at "The Red Room" (written by H G Wells) you will notice that it is written in Gothic writing. All of the characteristics of a Gothic story (which I mentioned before) are there. If you were to go to the opening of the story you would see that tension is starting to build even from the foundations of the tale. The author opens with the modern man saying, "'I can assure you', said I, 'that it will take a very tangible ghost to frighten me'". This sentence raises a few questions in your mind such as "why does the author start with this sentence for it is a very peculiar one indeed?' and 'is this sentence foreseeing the future?' The sentence, in fact, is there to open the scene. It shows the man a courageous man and it shows the fact that he is from a modern age for he obviously doesn't believe in ghosts. ...read more.

As the story gets faster, more tension is built which makes the reader want to read on. The climax itself then starts when the sentences are shortened and the ghosts are fully introduced. The lit candles start to be extinguished by the ghosts which emphasises the technique which the author uses about darkness and shadows - the darkness is seen as a danger and a threat and so without light (candles) there is only darkness. The author uses this to gradually build up tension instead of having a ghost pounce onto the man. Building up the tension slowly gives the author a chance to describe the events clearly with intense detail. The author even describes how the man stumbles away from the ghost causing injury, "I bruised myself on the thigh against the table". This makes the audience quiver and creates anticipation for if the character is hurt, it raises the question "what happens next? Will he escape?" The climax ends when the man hurts himself so much that he knocks himself out. This is very disappointing because the author had tried his best to build up tension but then just lets go of a good ending which leaves the story unfinished. It leaves the audience hungry for more. On the other hand, the ending allows the audience to be creative and think of their own ending but it takes an amazing imagination and some people don't have one. My personal response to the ending was that it was ineffective and disappointing because I expected more for it seemed as though the ending would be exciting because of the amount of tension built in the climax. That is all of the tension built in "The Red Room" so now I will move onto "The Signalman". The Signalman (a Gothic horror story) depicts an isolated man's struggle to overcome his fear of ghosts. The setting is at a small abandoned signal box situated next to a railway line, which has a tunnel at the end of the line. ...read more.

If I were to say when the author used all of them it would take me pages to describe. The climax doesn't build much tension because the story is told form the modern man's point as he sleeps in the inn. The climax mainly consists of the modern man reflecting on his experiences so far but it gives clues to the ending such as "unable to overcome a feeling that there would be something treacherous in my communicating what he had told me to his superiors". He knew that something would happen. The climax isn't what you would call a climax but, in my view, a disappointment but the author couldn't have a climax because the story is told form the modern man's point of view, not the signalman's and the climax would need to be from the signalman's point of view if there was one. In the ending, the author repeats the signalman's home - his "box". The box gives the audience the imagery of a coffin, which relates to death. I noticed that in the ending, the word, "appearance" hasn't got a capital letter while throughout the story it has one. This is because throughout the story it has been a proper noun but now is just a noun. The author also says the word "bed" repeatedly. This word could be associated with rest, which fits in with the story because of the signalman's death. At the end of the ending there is a short conclusion to the story. This is here to "wrap up " the story. It gives a perfect conclusion to the supernatural problems earlier approached. In conclusion to the question, "how do the authors use language to create suspense and an atmosphere of fear?" I give the answer that these stories are alike. They both have mainly the same structure, they both use the same techniques and they both follow the same rules because they are both Gothic stories so therefore share mainly the same concepts. Both authors use language and any other technique mentioned to build tension. Overall, they are both alike. Oliver Jarvis ...read more.