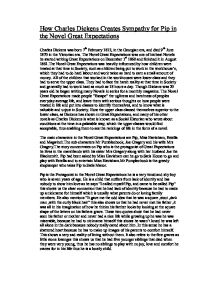 Charles Dickens was born 7th February 1812, in the Georgian era, and died 9th June 1870 in the Victorian era. The Novel Great Expectations was one of his best Novels he started writing Great Expectations on December 1st 1860 and finished it in August 1861.The Novel Great Expectations was heavily influenced by how children were treated at that time in Society, such as children being put to work in the workhouse’s, which they had to do hard labour and work twice as hard to earn a small amount of money. All of the children that worked in the workhouses were lower class and they had to serve the upper class. They had to face the harsh reality at that time in Society and generally had to work hard as much as 18 hours a day. Though Dickens was 20 years old he began writing many Novels in series for a monthly magazine. The Novel Great Expectations made people “Escape” the ugliness and harshness of peoples everyday average life, and leave them with serious thoughts on how people were treated in life and put into classes to identify themselves, and to know what is valuable and unjust in Society. How the upper class classed themselves superior to the lower class, as Dickens has shown in Great Expectations, and many of his other novels as Charles Dickens is what is known as a Social Historian who wrote about conditions at the time in a palatable way, which the upper classes would find acceptable, thus enabling them to see the rankings of life in the form of a novel.

The main characters in the Novel Great Expectations are Pip, Miss Havisham, Estella and Magwitch.The sub-characters Mr Pumblechook, Joe Gragery and his wife Mrs Gragery.The story concentrates on Pip who is the protagonist of Great Expectations he lives in the marshlands with his sister Mrs Gragery along with her husband Joe the Blacksmith. Pip had been asked by Miss Havisham can he go to Satis House to go and play with Estella and to entertain Miss Havisham.Mr Pumplechook is the greedy shopkeeper who takes Pip to Satis Manor.

Pip is the Protagonist in the Novel Great Expectations he is a very timid and shy boy who is seven years of age. He is a child that suffers from lack of identity and has nobody to show him love as he says “I called myself Pip, and came to be called Pip” this shows us the clear connection that he had lack of identity because he had to make up a nickname for himself which is usually what parents do or loving family members. He also mentions “It gave me the odd idea that he was a square ,stout ,dark man ,with the curly black hair” this also shows us that he had never met his father ,it was all in his imagination of how he thinks his farther looks by looking at the square shape of the letters on his fathers grave. These two quotes show that he had never seen his father or mother and never had a nice life while growing up he was he was miserable, because he had to nickname himself this shows he wasn’t loved he was left all alone in the dark because nobody really cared about him .In this sense he has a shattered heart because he has to make up images of his parents to comfort himself. This shows a very sad reality of living without them. It also refers to the five graves as little stone lozenges this shows us that he had five younger siblings that died when they were very young, thus he has no siblings to play with no joy, love and comfort he craves for in his life thus he is a lonely child.

Magwitch is the second main character in Great Expectations he is the convict imprisoned in shackles he is a very menacing, dark and mysterious character because he appears behind Pip in a grave yard which is supposed to be secluded. He says “Hold your noise or I’ll cut your throat”, this tells us that he is a very vindictive and vicious man because he threatened a young innocent boy this makes Pip cold with fear and traumatized so he will do anything that Magwitch says, because he is properly wandering why this is happening and doesn’t want to get hurt. He says “You young dog, licking his lips, ‘What fat cheeks ya ha got”. This shows us that he is very intimidating he is so hungry he is even looking at Pip’s cheeks and shows that he hasn’t eaten for days. This makes Pip feel timid and fearful. The Convict is very daunting because he glares and growls at Pip like he is an animal that is starving Pip is puzzled about the situation that he is in because he is with a very dangerous criminal who keeps on asking Pip lots of questions. Such as “Tell us your name! Quick! This makes Pip feel pressured to answer. He is a very menacing character as he says “Darn me if I couldn’t eat them” making Pip want to run away because this convict is just like a savage as he keeps on talking about Pips cheeks. He also mentions that if Pip doesn’t cooperate with him he has a young man that will come and rip his liver and heart out to eat. Magwitch at this point is manipulating Pip’s mind so that he believes everything Magwitch is conniving.

Estella the echelons adopted daughter, she is around Pip’s age though she act’s very mature considering  her age, thus when Pip says “After you Miss” out of politeness she replies in a very disdain manner with “Don’t be ridiculous boy,"I am not going in”. She reply’s impolitely as if to say I’m am not going in with you a lower class she acts far to mature for her age as though in her 20s.She looks down on Pip because he is a lower status than her, and she finds him inferior because she say’s “With this boy?, Why he is a common labouring boy”, thus she does not want to associate herself with him because she is “Rich” and he is “Poor”. She has absolutely no decency or manners towards Pip as she keeps on calling him boy thus she doesn’t see him as an equal. Estella is a spoilt girl because she always gets her own way and no one is allowed to say anything insulting about her because you will get on the wrong side of her and Miss Havisham.

Miss Havisham, the highest echelon of Society who remains static in both Time and Space the ultimate ruler of her domain. She is a very cold hearted and bitter woman. When she wants’ Pip to play cards she says to him “Play, Play, Play” commanding him to play with Estella and to amuse her .Pip does not have a choice because she is upper class and he is lower class and has to abide by the rules or else Miss Havisham will complain to Mrs Gragery and Pip will get the cane or hand. Miss Havisham is cold because she whispered to Estella “Well? You can break his heart” almost assuming that between her and Estella bulling him, they can lower his self esteem, confidence and pride. Therefore when Pip is at breaking point Estella can deliver the final blow to break his heart into pieces, though he has done nothing wrong. She is a very harsh woman as she keeps on repeating “Anything else?”x3 when she is asking what he thinks of Estella this shows she wants some idea’s out of him about what he thinks of Estella this will make Pip troubled and upset  because of all the horrible things she has said to Pip. She also looks at him with aversion. Miss Havisham looked like a skeleton with sunken eyes.

The Graveyard –The raw afternoon was bitter and cold that pierces the skin when exposed to the ruthless cold harsh wind. Pip is out in freezing cold weather when he should be at home in a warm house instead he is in a graveyard. The graveyard has not been cared for like other graveyards when they have the grass cut weeds pulled up flowers put down. This graveyard has been abandoned because it is lower class no one cares what it looks like because it is just a graveyard were the dead are buried so nobody can be bothered to clean it up. This gives a very miserable, dark and lonely atmosphere. The graveyard was intersected with dykes, mounds and gates with scattered cattle feeding on the marshes this place was daunting and melancholy in the sense.

Satis House is built off old bricks and dismal and had many iron bars like a prison and the place had looked like it was abandoned for years because the windows had been walled up and all the lower windows were rusty barred. When something is rusty is has usually been there for ages. The courtyard was also barred it is like the house had been imprisoned and no one can enter and no one leaves. The name Satis House means (Enough House) since this house is supposed to have a deeper meaning I think that the person had a wonderful life and everything they desired so they didn’t need anything more. Though Miss Havisham the Lady who now owns the house has nothing that she had desired in her life it all turned upside down on her wedding day and she had enough as well. The corridors/passages were all pitch black not a single candle light seen in sight just by the person guiding you so you don’t know what is going to happen.

The examples of first person- (Now waxwork and skeleton seemed to have dark eyes that moved and looked at me. I should have cried out if I could have).The technique used here is a metaphor. It creates sympathy for Pip