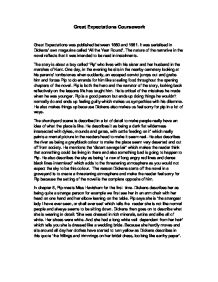 Great Expectations Coursework Great Expectations was published between 1860 and 1861. It was serialised in Dickens' own magazine called 'All the Year Round'. The nature of the narrative in the novel reflects that it was intended to be read in instalments. The story is about a boy called 'Pip' who lives with his sister and her husband in the marshes of Kent. One day, in the evening he sits in the nearby cemetery looking at his parents' tombstones when suddenly, an escaped convict jumps out and grabs him and forces Pip to do errands for him like stealing food throughout the opening chapters of the novel. Pip is both the hero and the narrator of the story, looking back reflectively on the lessons life has taught him. He is critical of the mistakes he made when he was younger. ...read more.

The reason Dickens starts off the novel in a graveyard is to create a threatening atmosphere and make the reader feel sorry for Pip because the setting of the novel is the complete opposite of him. In chapter 8, Pip meets Miss Havisham for the first time. Dickens describes her as being quite a strange person for example we first see her in an arm chair with her head on one hand and her elbow leaning on the table. Pip says she is 'the strangest lady I have ever seen, or shall ever see' which tells the reader she is not like normal people and always seems to be sitting down. Dickens then goes on to describe what she is wearing in detail: 'She was dressed in rich minerals, satins and silks all of white. Her shoes were white. ...read more.

You can tell that the house hasn't been used properly for ages because there are cobwebs and dust all over the inside of the house and is withering away like Miss Havisham. She says at the start of the chapter 'Enough House' is the name of the house which suggests she can't stand it any longer, can't really ask for anymore and no longer serves any purpose to her. At the beginning of the chapter, Dickens describes the house as being like a prison because he says that there is a high enclosing wall surrounding the house almost as if it's keeping people out. It could be said that Dickens' whole approach is to make obvious connection between people and the places where they live. This in turn raises the central question of the novel: is it possible to change where one lives with all that implies about class and status. ...read more.