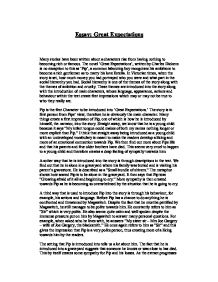 Essay: Great Expectations Many stories have been written about a characters rise from having nothing to becoming rich or famous. The novel 'Great Expectations', written by Charles Dickens is no exception to this as 'Pip', a common labouring boy recognises his ambitions to become a rich gentleman as to marry his love Estella. In Victorian times, when the story is set, how much money you had portrayed who you were and what part in the social hierarchy you had. Social hierarchy is one of the themes of the story along with the themes of ambition and cruelty. These themes are introduced into the story along with the introduction of main characters, whose language, appearance, actions and behaviour within the text create first impressions which may or may not be true to who they really are. Pip is the first Character to be introduced into 'Great Expectations.' The story is in first person from Pips' view, therefore he is obviously the main character. Many things create a first impression of Pip, one of which is how he is introduced by himself, the narrator, into the story. Straight away, we know that he is a young child because it says "My infant tongue could makes of both my names nothing longer or more explicit than Pip." I think that straight away being introduced as a young child with an undeveloped vocabulary is meant to make the readers develop a liking and more of an emotional connection towards Pip. We then find out more about Pips life and that his parents and five older brothers have died. This seems very cruel to happen to a young child and therefore creates a deep feeling of sympathy towards him. Another way that he is introduced into the story is through descriptions in the text. We find out that he is alone in a graveyard where his family was buried and is visiting his parent's gravestone. ...read more.

The way she spoke to Pip made him sound inferior. She repeatedly gave him commands like "Look at me," and "Come to me," These show the gulf in class between them because Pip, each time, obeyed with no argument. Also, when she asked Estella to come in and play with Pip, she told Estella to "Break his heart." This is probably because she hates all men since her heart was broken, but maybe she thinks that because of the huge gap in class between them, that Pip is a toy for her to do with what she pleases. The final way that Dickens uses to introduce Miss Havisham into the story is through the setting that she is in. The way that Pip that describes it makes it sound like quite a depressing place. Everything has faded in colour and there is no natural sunlight. We know this because Pip says "I saw that everything that ought to be yellow had lost its lustre and was faded yellow." This makes us feel sorry for Pip because he is in such a depressing place with people who seem to hate him and they are forcing him to play cards. The second character to be introduced into extract two is Estella who is Miss Havisham's daughter. Pip starts to judge her as soon as he meets her and this is one way that she is introduced. Pip has conflicting views about Estella. Firstly, he thinks that she is somewhat horrible to him, speaking to him as if he were less of a human being than she is. She constantly calls him "Boy," and then even calls him a "Common labouring boy," each time saying it with distain or in an uncomplimentary way. But despite her insulting language, Pip seems to develop affection towards her. He thinks about her as being "Beautiful," and when asked by Miss Havisham what he thinks of her he tells her "I think she is very pretty and I think she is very proud." ...read more.

I could scarcely stammer that I had no objection." Pip is going to get everything he wanted but there is still a downside. He is leaving his life behind, which wouldn't be so bad except for the fact that he is leaving his best friend and half brother, Joe, behind. Pip says, "Oh dear Joe, whom I am so ready to leave and so unthankful to." This makes Pip sound guilty and sorry that he is leaving as he is breaking up what family and friends he has left and what friends and family Joe has left. So, despite Pip being able to fulfil his 'Great expectations', his life is being torn apart and, because he will soon be the highest of social hierarchy, he may never see Joe again. In the book 'Great Expectations', Charles Dickens introduces many main characters into the story He uses a wide range of techniques, for example, adjective, metaphors and similes to show a characters appearance, actions or even the setting that they are in. These all helped give an introduction of the characters and give us some idea their background on which we could base our judgment of them on. There were also themes introduced into the story which all affected the main protagonist, Pip. In the first extract, where the theme is cruelty, the theme represents how bad Pips life was and is at that point of the story. In the second extract, the theme of social hierarchy represented Pip realising that he wants to be rich and marry Estelle because he no longer wanted to be treated badly. Then in the final extract, the theme of ambition represents how Pip finally gets his chance to realise his ambition as he is presented with a fortune. In the third extract, Pip thinks that Miss Havisham is the one supplying him with the money. This makes the readers change their opinion of her to think that she is kind. This leaves the question that maybe first impressions are not always accurate and that you should learn more about the person first. ...read more.