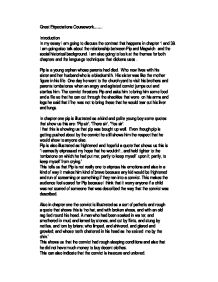 Great Expectations Coursework....... Introduction In my essay I am going to discuss the contrast that happens in chapter 1 and 39. I am going also talk about the relationship between Pip and Magwich and the social historical background. I am also going to look at the themes for both chapters and the language techniques that dickens uses . Pip is a young orphan whose parents had died. Who now lives with his sister and her husband who is a blacksmith. His sister was like the mother figure in his life. One day he went to the church yard to visit his brothers and parents tombstones when an angry and agitated convict jumps out and startles him. The convict threatens Pip and asks him to bring him some food and a file so that he can cut through the shackles that were on his arms and legs he said that if he was not to bring these that he would tear out his liver and lungs. ...read more.

This can also indicate that the convict is insecure and unloved. The convict is also illustrated as threatening regarding his speak and actions a quote that shows this is 'You bring them both to me, or I'll have your heart and liver out'. This gives us the idea that the convict has nothing to lose because no man in their right man would be so threatening towards a young boy of pip's age. I think that this shows aggression and masculinity and I think that because the convict is bigger then Pip that he has a much bigger advantage over him. In chapter 1 the relationship between the convict and Pip in this chapter was Completely different concerning their personalities and the way they acted. In this chapter out of both the convict and Pip, Pip was the most calm and polite one because he says to the convict 'If you would be as kind as to let me keep up right sir; perhaps I shouldn't be sick and perhaps I could attend more' This tells us that Pip is a clever boy and that he ...read more.

It makes us think that his family could have died from natural causes but, they could have died of many things such as polio, smallpox, yellow fever, whopping cough, TB and influenza which were all going around during that time. Dickens uses many different and effective language techniques. Language techniques such as Descriptive language such as adjectives and adverbs. Quotes that show this are 'no hat and broken shoes, a man that had been soaked in water, cut by flints, and stung by nettles, and torn by briars'. This gives the readers the effect that the convict is not in good health and his clothes are in bad condition. Other examples of language techniques that Dickens uses are similes and metaphors. Quotes that show this are 'low leaden line' and also 'Savage lair' this gives the readers the idea that Dickens was building up to something because he uses words like, dead, buried, savage and lead. This might have the effect that there is a sense of dramatic irony. Because if Dickens was building up to something and the readers all ready have a faint idea of what is going to happen . ?? ?? ?? ?? ...read more.